Would he shoot at them?

Romance
Uvi Poznansky
Next to me, Timmy turns onto his stomach, mashes his nose against the tire, and wedges himself, somehow, between the curb and the Ford. Then he crawls under it toward the rear bumper, making room for me, too.
I try to cock my head up from the damp surface. Looking at the scene from under the belly of a car is a whole different experience. Someone stands at the other side of the car, and all I can see is his sneakers, socks, and the hem of his coat, flaring at its bottom. Also, the muzzle of his gun. For a heartbeat, before dark clouds close in, it glints in the sunlight.
I reach over and clamp a hand over Timmy’s mouth to prevent him from screaming, from drawing the killer’s attention. A hail of bullets rains down, sparking off the front bumper.
Timmy tenses up. His breath trembles as it escapes my touch. I must protect him. I must bring him back safely to his mother.
The edge of the curb gouges into my back. I adjust, I turn over. Now it presses against my belly.
I must not lose this child, either.
Now, the killer kicks the grill of the car, then jams his weapon, hard, into the front window. I know it by seeing only one of his feet on the ground and by the sound of cracking. It reverberates all over as the car shakes. Shards of glass come pinging against the asphalt and stab at my fingers.
Why is he wasting his time—at the risk of being identified, or even caught—on an empty car, when all around us, juicier targets come into his view?
The first police patrol car tears around the intersection, lights and sirens screaming. It screeches to a halt. A second car follows suit, then a third. Officers file out of both of them, weapons drawn.
Would he shoot at them?
Excerpt from Overkill 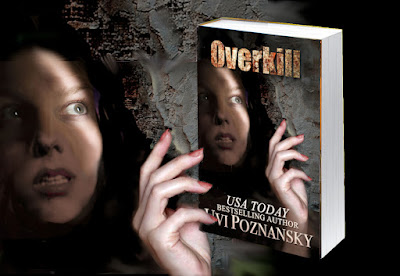 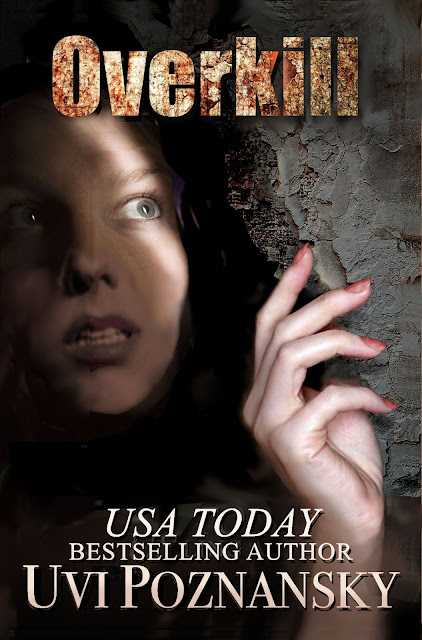 The last thing Ash expects when she lands in Clearwater, Florida is to be stalked by a troubled teenager. If that's not bad enough, she is caught in a shooting spree next to the nearby elementary school. The cops think it’s an attempt at mass killing, but Ash wonders if the only victim was specifically targeted by the killer. Will she manage to identify him and have him arrested before he comes after her?
Original link