Why some men think that all women can be their property? 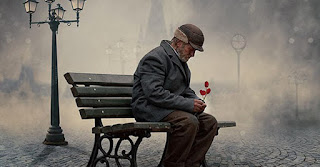 When a man is handsome, it is his advantage. Many doors will open to him, and many women will ask for his attention. What makes a difference is how that man use his attraction, on bad or a good way?
Some guys act like morons. They will use their sexy appearance to treat women like cheap trash. They will try to use them just for sex and then throw them. They will use rich women to get money, young women to use their naivete, and depressed women to use their feeling of loneliness.
Internet is a heaven for men with evil attention. Here how the story goes:
"I am handsome, I can get every woman. I will follow her, like her photos and ask for Whatssup. Then I will ask her for naked photos. After that, I will call her to see her naked. Then, if it is possible, I will ask for a real meeting, to fuck her."
If a man thinks that things will go smooth, he is in misguide. A smart woman will ignore him, and if he is persistent, he will say him to back off and block him. Such men will call a bitch a woman who dare to say him bad words. In another hand, a bad mannered man will take a challenge to seduce a woman with attitude, because she is a hard nut.
When a man is handsome and well mannered, this is a treasure.
Such men will be recognized by the next characteristics:
He will not push a woman to do what she doesn't want.
He will back off if a woman says him NO.
He will not insult a woman when she disagrees with him.
Some men can't understand, that a woman needs space and distance. Even if she doesn't like you, at first sight, she maybe changes mind if you respect her choice.
A man makes a mistake when he puts all women in the same box. If you are fishing in the woman's area, you can't use the same bait. We, women, don't like to be compared with each other. You are not a cock, and we are not your hens. If you act with women like they are your property if you don't show respect, and even worse, if you are aggressive and rude, you will not gain success.
Maybe you will get a woman, but she will not be the one you wish. You will get a desperate woman, the one who doesn't respect herself.
Some rules on social networks which will prevent you to be blocked by women:
Don't wave to unknown women.
Don't poke them.
Don't ask their Skype or Viber or Whatssup.
Don't message them if you don't know them personally.
Don't ask for nude photos.
Don't contact married women.
You don't need to be a jerk just because you need sex or you are lonely. Or because the woman left you.
The sexiest men walk with a smile on their faces, they are busy by gaining their aims and they are not afraid to be alone.
Original link
Original author: Kristina Gallo