VE DAY – The end of the Second World War in Europe

The long weekend of 8th – 11th May 2020 was supposed to see massive celebrations of the 75th anniversary of VE Day (the ending of the Second World War in Europe) with the British May Bank Holiday being moved for only the second time in history to accommodate this. We are, however, living in unusual times with many countries in lockdown due to the Covid-19 Pandemic so ceremonies and celebrations will not go ahead as planned. I believe it is hoped that these can be postponed until August to coincide with VJ Day (Victory against Japan), but until then we can remember and celebrate online…

(Please read this article for some ideas on how to celebrate VE Day during lockdown).

VE Day marked the end of six long years of war against Germany which had caused so much suffering and death for many countries. April 1945 saw many of the Allied forces beginning to overrun Germany from the west whilst Russian troops were advancing on the eastern front. The two armies met at the River Elbe on 25th April and it was obvious to everyone that Germany could not win the war.

The inevitable defeat of the Nazi forces had long been anticipated, and with Berlin surrounded by Allied armies Hitler took what many saw as the cowards way out by naming Grand Admiral Donitz as his successor then killing his dog and his new wife, Eva, before committing suicide himself on 30th April 1945. 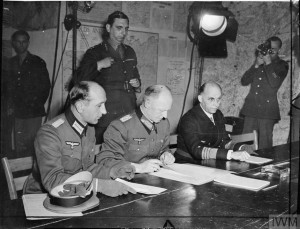 On 4th May Field Marshal Montgomery accepted the unconditional surrender of German forces in northwest Germany, the Netherlands and Denmark at Lunehurg Heath near Hamburg. Three days later The Supreme Allied Commander, General Eisenhower, accepted the unconditional surrender of all German forces at Reims with General Jodl signing the document on behalf of the German people. The agreement was for the war to officially end the following day on 8th May 1945.

The long-awaited end of the war in Europe was announced in a radio broadcast on 7th May and the following day declared a national holiday. 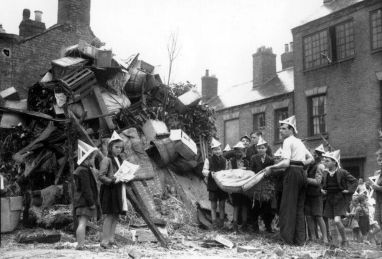 Building a bonfire to celebrate

As soon as the news of victory was announced flags and bunting were strung across streets and house fronts, bonfires were built and lit, and the pubs were full as many people did not want to wait one more night to begin their celebrations!

After years of rationing people were told on the morning of the 8th that they could buy bunting without ration coupons, many restaurants quickly put together a ‘victory menu’, there were parades, street parties, and services of thanksgiving – St Paul’s Cathedral in London accommodated 10,000 people in ten services which ran one after the other.

Throughout the war years the British people had been led by Winston Churchill who spoke on the radio in the afternoon of the 8th reminding people that ‘We may allow ourselves a brief period of rejoicing; but let us not forget for a moment the toil and efforts that lie ahead.’ He was, of course, referring to the fact that the war in the Far East was still on-going with British soldiers, sailors and airmen still fighting and dying for freedom. Later in the day the Prime Minister stood on the balcony of the Ministry of Health and thousands listened to his speech declaring that ‘This is your victory’ to which the crowd replied ‘No, it’s yours!’

As the victory celebrations unfolded huge crowds collected in the Mall and in front of Buckingham Palace to see the royal family. King George VI and Queen Elizabeth went out onto the balcony no less than eight times, once accompanied by the Prime Minister. During their last appearance two young women standing looking up at them were no less than the princesses Elizabeth and Margaret who had been allowed to go out incognito to join the celebrating crowds. Queen Elizabeth later said ‘We stood outside and shouted, “We want the King”… I think it was one of the most memorable nights of my life.’ (see The Windsors at War – Part 2 Queen Elizabeth II). 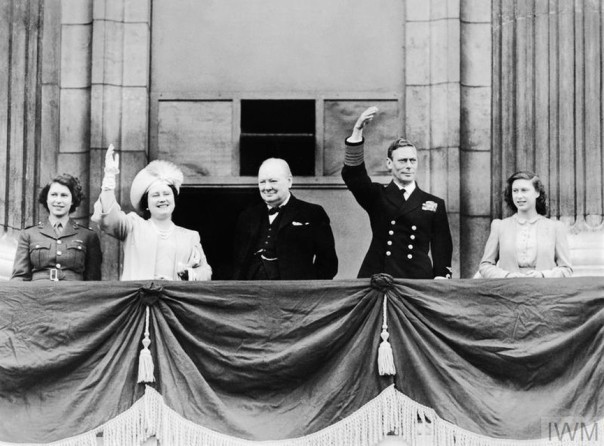 It is thought that around 50,000 people were crowded around Piccadilly Circus as the first VE Day came to an end with people dancing and singing in the streets. The joy of victory broke down the famous British reserve as people spoke and danced with complete strangers as pubs and dance halls stayed open until midnight to allow the celebrations to continue.

Celebrations took place around the world, although there was sadness in America that President Roosevelt who had led the country throughout the war did not live to see the final victory (he died on 12th April 1945). Even so the celebrations were so great that large numbers of police officers were detailed to control the crowds in Times Square. In Paris huge numbers flocked to the Champs Elysees and Place de la Concorde. There were also celebrations in Australia although the war so close to them in the Far East was still ongoing. In Canada where the liquor stores had been closed for the celebrations military personnel in Halifax rioted and led the looting of liquor stores which led to a number of deaths.

Amidst the celebrations for the ending of the war in Europe there was also sadness at the thoughts of those who had died and would never return home to a country at peace, and people were aware that the hard times were not yet over – the war against Japan still had to be won, rationing would no doubt continue and there was a great deal of re-building to be done. But for now, for one day, they celebrated the ending of an era of destruction and a new beginning… 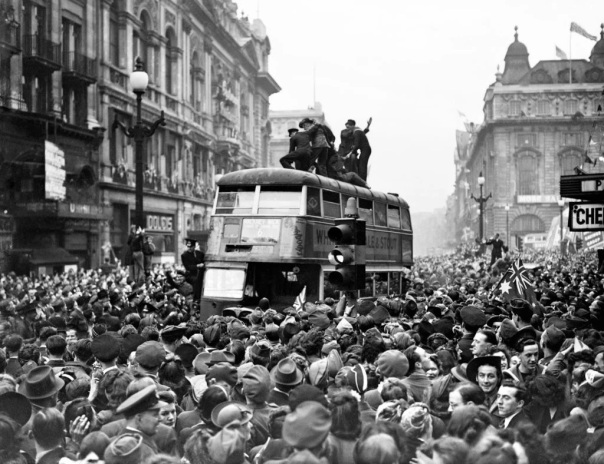 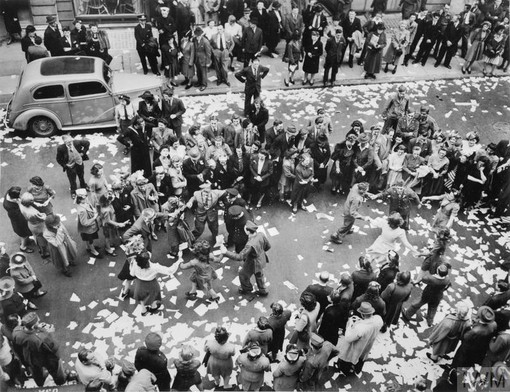