THE GIRL WHO DISAPPEARED by James Lingard 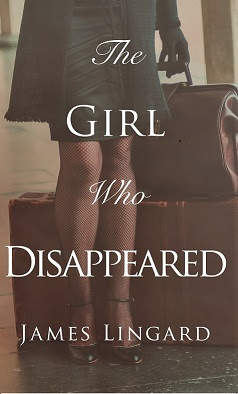 It is a fact-based historical novel set in Britain in the 1930s and continuing through the Second World War and the 1940s and 50s.
Emily living with her strict parents in Halifax falls in love with Walter Lingard but on bringing him home, her father throws him out of the house and tries to force her to marry someone else. Emily elopes with Walter during the night to escape her domineering father.
They start their married life in America but move back home for Walter's career at Lloyds Bank. Their lives are turned upside down by the Second World War.
This is a fascinating novel set in a turbulent time, using a woman's voice on her thoughts and feelings of war. Her character grows as time passes from a spoilt young women to a mature lady who has experienced a challenging life. We see her struggle to survive the devastation brought about by the war as she and her four-year-old son are thrown into the midst of danger and death. The family experience rationing and the terror of bombing. Their air raid shelter is destroyed by a direct hit.
When Walter volunteers for the army, Emily and her son are evacuated to a rat-infested cottage in a farming community near Hebden Bridge. The war changes Walter into an efficient army officer who demands to be obeyed. Emily worries that she might have a rival for his affections.
The Girl Who Disappeared is a moving love story about one woman’s enduring resilience, a story full of quiet humour and surprising twists and turns.

Bradford Telegraph and ArgusKEIGHLEY features in a new romantic novel set during the era of the Second World War.Author James Lingard has devoted an entire chapter to his family’s time in the town, during the years immediately after the conflict.
The Girl Who Disappeared – to be launched on January 14 as a paperback and e-book – is substantially set in Keighley, as well as Halifax and Hebden Bridge.
“Chapter 18 is devoted to the years my family spent in Keighley,” said Mr Lingard.“My father was the manager of the Lloyds Bank branch in the town from 1947 until the early 1950s. I well remember the town as it then was.”
The Girl Who Disappeared is a historical novel, inspired by real events.
‘Heroine’ Emily falls passionately in love with working-class Walter.
But the relationship is fiercely opposed by Emily’s class-conscious father.
Her actions see her struggle to survive the devastation which follows during the Second World War.
The family has to contend with rationing and the terror of bombings.
And when Walter volunteers for the army, Emily and her young son are evacuated to a rat-infested cottage in a farming community.
“The war changes Walter into an efficient army officer and Emily worries that she might have a rival for his affections,” says Mr Lingard, who adds that he has been delighted by early reviews of the novel.
One reviewer described it as “hard to put down” and “a very well-defined – and at times frightening – view of life in Britain during World War II”.

Mr Lingard attended University College London and became a leading solicitor in the City of London, specialising in banking law and insolvency.
He was a council member of the Association of Business Recovery Professionals and the European Association of Insolvency Practitioners, and judicial chairman of the Insolvency Practitioners Tribunal.
He’s the original author of Lingard’s Bank Security Documents and a number of other legal books, and more recently wrote Britain at War 1939 to 1945.
The Girl Who Disappeared is published by Clink Street Publishing.
THE GIRL WHO DISAPPEARED was prompted by some reviewers of my nonfiction history book, BRITAIN AT WAR 1939 to 1945, who expressed disappointment that it did not cover the periods before and after the war.
The new book is closely fact-based but categorized as historical fiction because it contains considerable dialogue and covers the pre-war period before I was born. From 1940 onwards, I write from personally having experienced what took place including a number of near-death dramas.

Where did you grow up? I was born in Petts Wood (a suburb south of London) but my formative years were in Hebden Bridge / Keighley Yorkshire.
Was there any one person who influenced you? Richard Gallichan, a solicitor.
Curious – how did he accomplish that?
He specialised in banking law and taught me the basics of the subject I subsequently specialised in.
What were any childhood experiences that might have shaped your personal development?
Two years at boarding school (Dulwich College)
Was the law always something that you wanted to pursue? Yes from 17 onwards.
What about it excited you?
Insolvency law is exciting. Can the business be salvaged? Are all the employees out of work?
At what age did you discover that you liked to write? Twenty when my first magazine article was published.
Was it well received? What about it hooked you?
It got published and I had the thrill of seeing my work in print.
What did it feel like to change from writing legal briefs and textbooks to surrendering to the emotional path of character building and plot development?
When I retired from front line insolvency law, I decided to do something entirely different and spent a weekend listening to lectures by a novelist.
My first novel was not a commercial success so I changed to nonfiction and wrote Britain at War 1939 to 1945. A reviewer suggested that I expand this and write from my mother's point of view. This I did with help from Cornerstones and others. The characters and plot in THE GIRL WHO DISAPPEARED are 90% fact-based.
Have you always had a passion for history?
Yes, from school onwards.
What is your most favourite century/decade to study?
The 19th century.
Name one event in your life that changed you or changed your path? Retirement!