The busiest time of the year

Romance
Uvi Poznansky
Jolie touched her stomach and smiled with sadness. “You never stop missing those who have gone before—but after a time, the memories don’t hurt as much. You can think of them with love.”
Zoe hugged Jolie. “Thank you. Now, on to a happier thought so that I don’t spend the rest of the evening blue—when is your baby due?”
“Just in time for the holiday!” Jolie laughed. “The busiest time of the year.”
“Christmas Day,” Heath said in droll tones as he came back up on the main deck. Brayden was right behind him, grinning wide. “And Jolie won’t let me name her Santa.”
“Noelle is nice,” Jolie countered. “And you don’t like that either.”
“Merry?” Brayden suggested.
“Boring!” Zoe and Jolie said in unison.
“There is a lot of pressure involved in naming a kid,” Heath said. “More so than a boat. Come on, sit down.” He handed Brayden a beer, took one for himself and gestured to the wines. “Zoe? What can I get for you?”
“Pinot Grigio is fine.”
“This way we can talk comfortably,” Heath said. He handed her a glass.
“And he likes to talk.” Jolie touched Heath’s arm with affection. “He used to be the quiet, brooding type.”
“Maybe it runs in the family?” Zoe asked.
“I don’t brood.” Brayden had the nerve to look offended.
“But you are definitely quiet.” She dared him to argue with that.
“Time out, kids,” Heath said, laughing. “When are you off leave Brayden?”
Zoe sipped her wine, waiting to see what Brayden would say.
Excerpt from Returning Home by the Sea by Traci Hall
Included in Love in Times of War 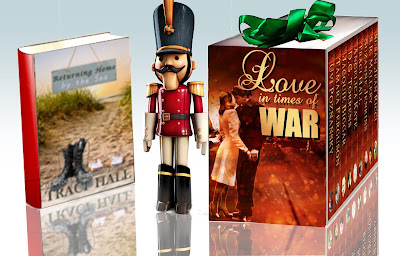 Love Romance? Give yourself the best Christmas gift:
Love in Times of War
★ Kindle ★
Free on Kindle Unlimited
Original link