Stream of Consciousness Writing On the Anniversary of 911

There’s a virus among us. It came from far away and is now everywhere. We’re supposed to stay home and when we go out, we’re supposed to wear a mask, like Zorro. And, there are fires all over California. People with asthma can’t breathe. People are sad. There are riots all over the place and a few peaceful protests that end up being taken over by mobs. I think God turned up the heat on the chaos in the streets. Bad folks don’t like 120 degrees either.

Those people who flew into the tower—they were animals.

There’s an election and some political crazy talk. Each side sounds horrid. Wake me when it’s over. But, if you really think one side is better than the other, then you should vote. Make a difference. I am neutral. My fate is in God’s hands. I lean toward the right I suppose, and I’m already flagged by the online media marketers and trolls who label people. I like cops when they stop criminals. Breaking the law is wrong. Why do people think looting is okay? I love the fire department. The first responders, doctors, nurses and those who want to help. I love the United States of America. I like humans of every race, creed and color. My religion welcomes everyone. We are not racist. I am a woman of peace. I write poetry. I love my family. I don’t judge you. There are people of many nationalities in our family. They are all citizens and have vowed loyalty to the U.S. Some served in the military, defending this country. Some family members speak three or more languages. Can you speak several languages? The news seems different in other languages. Even BBC news is different from our local news. I guess it’s all perception. Maybe people who tend sheep in New Zealand think the world is a peaceful place. Being a shepherd near Wellington sounds idyllic.

I love my dog. Like a border collie, she has come out of retirement to watch the neighborhood. Her nose twitches from the scent of smoke. She loves our neighbors. Every night she watches the news with us and she can tell something is wrong. She is on high alert. Not bad for being 15 years old! Right now, she stares from the window, her eyes scanning the street. Finally, after many years, she recognizes the postman and figured out she doesn’t need to bark.  Right now, nothing looks out of the ordinary, but she is ready. Ready to love and kiss everyone. Ready to protect. 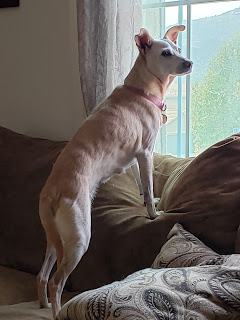 I love animals who act human. Pinky loves everyone.

My book, The Happy War is about a couple who will risk their life for peace. It’s now available in a hard cover version too. I think that’s pretty impressive, if I may say so myself. 😊The reviews I’ve received, so far, are awesome. I am honored by the kind words. Just wow!

There needs to be a real, legal way to create happiness. At least my characters tried something unethical and immoral to fight hate. But it’s fiction, and their perception of things is skewed by me, the author. In other words, I lived my dream of peace on Earth vicariously, through the lives of my characters. When you read a book, doesn’t it take you on a journey somewhere? Don’t you feel better when reading a book? I guess that’s one of the reasons I wrote this book. If even one person finds my novel entertaining, during this maelstrom called life, then I did something right.  In a desperate world, we hold onto hope. We hold onto every morsel of beauty and love.

Join me in silent prayers...

And, let us never forget those who died on September 11th.