Storm Rider I Donovan Versus Cameron

Good morning and welcome to Friday Feelings. Today, we’re talking about Storm Rider 1 Donovan Versus Cameron the story of a young man tasked with stopping two families from destroying each other.
Given  the duty of Storm Rider, Phillip seeks to stop two families from destroying each other...
Storm Rider 1 on Spotify
Blurb
Storm Rider—one called to stand between warring factions and bring about peace, no matter the consequences.
Phillip Wermeer receives this reward for defending the honor of a scullery maid, murdered by an earl in the eighteenth century. He’s given a gift, to protect those who have been attacked without provocation, because they have come upon individuals who believe they’re above all laws.
His duty is to stop two families, the Donovans originally from England and the Camerons a Scottish clan, from wreaking havoc on themselves and others. Throughout time, Phillip steps between these groups to prevent tragedy.
Will he ever stop the animus between these families? 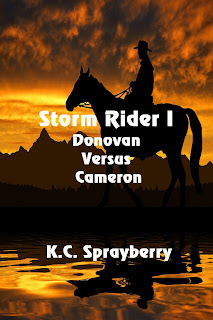 Amazon eBook
Amazon Print Book
Excerpt
Frost was far too light a description for what lay upon the ground this December morn. Phillip Wermeer cupped his hands in front of his mouth and blew on his cold flesh. This area was near to the Scottish border, close enough to where they could hear the rumblings of battle from King George II’s men pushing back the heathens to the Highlands.
“Get in here!” an angry male voice shouted.
With a sigh, Phillip turned away from the castle and headed toward his duties in the stables. Soon, the lords and ladies attending his earl would be wanting to go on a hunt. They’d be demanding that their horses be saddled after being fed. Slacking off this chill morning wasn’t in the cards.

About K.C. Sprayberry
Living a dream she’s had since she first discovered the magic of books, former California native, K.C. Sprayberry traveled the U.S. and Europe before finally settling in the mountains of Northwest Georgia. She’s been married to her soulmate for nearly a quarter of a century and they enjoy spoiling their grandchildren along with many other activities.
A multi-genre author, K.C. Sprayberry is always on the hunt for new stories. Inspiration strikes at the weirdest times and drives her to grab notebook and pen to jot down her ideas. Those close to her swear nothing or no one is safe if she’s smiling gently in a corner and watching those in the same room interact. Her observations have often given her ideas for her next story, set not only in the South but wherever the characters demand they settle.
Find out more about her books at these social media sites:
Facebook Twitter Spotify Goodreads
Amazon Author Page Pinterest Manic Readers AUTHORSdb
MeWe YouTube Authorgraph Email
Original link