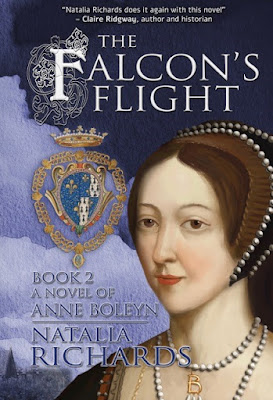 New from Amazon UK and Amazon US
Anne Boleyn's life is threatened, intrigue, gossip and treachery abound, and her destiny is finally revealed.
Hello everyone, before I go any further, can I just say thank you so much to Tony for inviting me to be interviewed on his blog. I am delighted to be part of 'The Writing Desk' as it is such an interesting site.

Tell us about your latest book 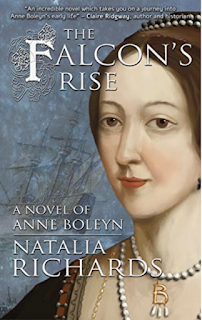 My latest novel is called 'The Falcon’s Flight’. It is part two of the story ‘The Falcon’s Rise’ and both books cover the early life of Anne Boleyn. In this second book, Anne is aged 14 as she travels to Paris to join her sister as a maid-of-honour to Princess Mary Tudor. The princess has just married old King Louis, and Anne catches up with her sister at the coronation. When she is asked to help the mother of the young king-in-waiting, Louise of Savoy, she is unclear where her loyalties lie and soon makes an enemy of Mary Tudor. Intrigue, gossip, and treachery abound. When the widowed Mary returns to England, Anne remains in France to serve Queen Claude, but due to her sister’s actions, her place at court is threatened. A dangerous love affair follows, and Anne finds an unlikely ally in the new king’s mistress, Françoise de Foix. When Anne’s life is in peril, her destiny is revealed. However, nothing goes to plan, and life at the French court is not quite how she imagined. Constantly travelling, she accompanies Queen Claude as she journeys through France and the Loire valley, before finally arriving – a young woman more French than English – at the Field of the Cloth of Gold in 1520.

I had a fantastic time in France researching this book in the beautiful Loire region, visiting the châteaux and archives, and seeing the places Anne would have seen. It was a wonderful experience to be able to walk through the rooms where Anne resided and to experience the beautiful countryside. It was also a perfect opportunity to buy books, maps and documents unavailable in the UK and so increase my knowledge of the places Anne visited.

I started writing this book when I was still working full-time, so concentrating on it often took a back seat. I’d use the evenings to read and research, but I made sure Sunday afternoons were always put aside to plan, construct, and write. When I retired, in 2016, I was halfway through the book and had more time. However, I have to say I find it very hard to sit still. Not at all good for a writer! So my routine is to do my jobs in the morning, get out for exercise and fresh air, and then start writing from about 4 pm onwards. I’ve always worked better at the end of the day as I have never been a morning person.

Well, I feel very flattered by that question! However, in my small way, I hope I can offer some advice, learnt mainly through making mistakes.
Firstly, get hold of a copy of The Writers and Artists Yearbook for publishing advice etc. It is incredibly useful, with lots of contact addresses and practical tips for new writers.Next, I would advise that you write because you just have to tell your story, not in the hope of making money. There are no shortcuts and you cannot short change your readers by trying to get a book out there quickly. It might take you years, but just go at your own pace and don’t rush it.Write about what you know about, or are familiar with. This will give your book authenticity, so read and research at every opportunity.Think about who is going to read your book and where it will sit in the market. Be very clear who your audience will be.Write every day. Even if it’s just a description of something, or writing out a favourite piece of prose. It keeps your mind trained on the art of writing and using words, and I found it important. Don’t worry if you have a bad writing day, do something else, but don’t leave it too long before returning to your book. I found it much harder to pick up where I’d left off after a few weeks’ break. It’s really easy to slip out of a routine.Edit, edit, and edit again. If you are planning on sending your manuscript to a publisher, your work must be as near perfect as possible. Nothing puts people off more than shoddy punctuation, spelling, and grammar. I had the annoying habit of spelling people’s names and places differently, and I hadn’t even noticed. Make sure you keep everything consistent. You can, of course, pay for professional editing, but there are also good grammar/spelling programmes on the internet to run your work through. Just make it as good as you can get.Network. Social media and the internet are full of lots of writers groups where you can get support and advice. They are always happy to advise and help new writers if possible. If you don’t like online groups, try your local community. Ask if your local book club would mind reading your book. Don’t be afraid, just ask!Finally, try not to get discouraged. Your writing will not be like anyone else’s, because it is unique to you, so don’t compare yourself to other authors. They all started somewhere. And if you give it your very best shot, the effort will pay off.
What have you found to be the best way to raise awareness of your books?

Well, social media is just great and I found that starting simply with something like FaceBook and asking people to share information about my novel was of enormous value. I also found out what sites, groups, pages, etc might relate to my subject and joined them. Of course, if you are writing about someone that has a huge following already (such as Anne Boleyn!) then you have a head start, with fans on social media at your disposal for marketing. People are very kind and helpful and will always try and promote you if possible.

If you are unsure about how to use social media – and there is no problem with that – there are still things you can do. With my first book, I had hundreds of advertising flyers printed. I then stood day after day outside bookshops and cafes, handing them out to people. I also left leaflets in bookstores, libraries, museums, and at book fairs. I gave talks about my book and took copies along to sell. Everywhere was an opportunity to advertise my story. It was all very old fashioned, and, of course, we were not in the middle of a lock-down, but it did feel as if I was doing something, and some of my best reviews were from people I'd chatted to, face to face. So, if you are not keen on using a computer, you can still – hopefully not before too long –get out there to raise awareness.

Tell us something unexpected you discovered during your research

That my understanding of French is much worse than I remembered! I had started to write about Anne at the French court but then, to my surprise, hit a brick wall. I discovered that nothing was written in English about Queen Claude, apart from a few bits on Wikipedia or short biographies. Since Anne was one of her maids, I needed to find out about her life and where she was at any given time between 1514 and 1521, the time scale of my novel. Not one to be defeated, I bought all the French works I could find on Claude, the French royal family, and the French court and then tried to translate them. But it was pretty slow going. Fortunately, help was on hand from a friend from Burgundy but it took me over a year to get the information I needed. So, I wasn’t expecting that at all and it certainly slowed me down.

Do you want the truth here? I wrote a sizzling scene with Anne and her lover. Talk about a bodice ripper! However, being a convent girl, I bottled out. Besides, I thought my mum wouldn’t like it (Who am I kidding? She’s 90 for Heaven’s sake!)

But joking aside, when I read it through I thought it didn’t sit well with the Anne I had created – it just didn’t ring true. I tried several times but it was no good. Having made my novel as factual as possible such a descriptive scene had, I felt, moved into the realms of fantasy. I have to say, it got deleted pretty quickly!

Well, this is supposed to be a trilogy and the plan is to start writing ’The Falcon’s Fall’ about Anne Boleyn at the English court, her meeting with King Henry, and then her downfall. However, I’m having a break at the moment, although I have written the words 'Chapter One.’ However, I’ve also been delaying because I’m researching into a new angle, a new perspective on Anne’s life. Will I find it? We’ll have to wait and see.

Natalia Richards
# # #
About the Author 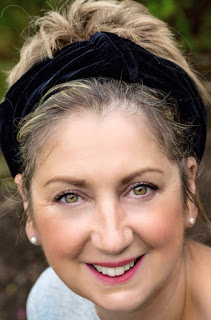 As a curator and historian for over 30 years, Natalia has worked in many museums in Derbyshire and later in London. She also worked free-lance for the History Channel USA as researcher, co-ordinator, and interviewer on the award-winning production 'Secrets of War.' However, her passion since a very early age has been the study of the Tudors, particularly Anne Boleyn and the court of King Henry VIII.  She did not begin writing seriously until around 2008 and originally wanted to write about Anne Boleyn at the English court. However, a great deal had already been written about this period, and Natalia began to look at her earlier life from around 1500 to 1521. The result of her research was 'The Falcon's Rise,’ set at the court of Margaret of Austria. She then followed this up with part two 'The Falcon's Flight'. This second book covers Anne's time at the French court, with Queen Claude, and ends as she is about to return to England. In her spare time, Natalia loves travelling, gardening, rambling, and visiting historic houses, as well as constantly reading and researching the Tudor period. She spends her time between Derbyshire and Chelsea, in London. Find out more at Natalia's website https://www.nataliarichards.com/ and follow her on Facebook and Twitter @nat_wieczorek
Original link