Sin and Zen by S.W. Stribling 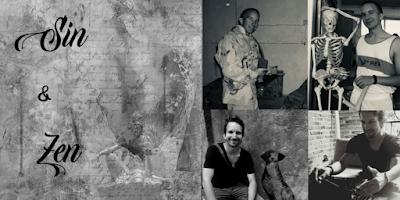 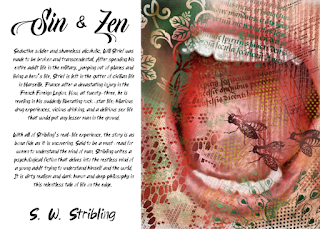 WILL STRIEF is an American in the French Foreign Legion who was recently injured in a bad parachute jump and recovering at a Legion retreat in the South of France: Marseille. After a few months of adjusting to a slower lifestyle, he meets a very strong and independent woman, CLAUDIA, who doesn’t seem impressed by him, nor does she pity him as the lost boy he really is.
The first time they really go out, they end up making love in the bottom of an empty bathtub. This sexual relationship remains a secret  amongst mutual friends for nearly a month before it is revealed that CLAUDIA is somewhat of a femme fatale with the men she has been with and has a long-term boyfriend back in her home country, Romania. This revealing information leads to the beginning of an off-and-on relationship between WILL and CLAUDIA dancing around the ideas of love, trust, and friendship.
The two later have an early pregnancy scare that brings their relationship from just sex to something more intimate. As time moves forward, WILL convinces CLAUDIA to become exclusive, but with her still maintaining the indifferent attitude to the whole idea of a traditional relationship which causes internal conflict for the younger and less experienced WILL.
As their relationship continues, WILL is also forced to deal with his career in the French Foreign Legion and his future in general. By the end of the first year together, the two seem fairly stable and WILL is medically discharged from the Legion. Being discharged, CLAUDIA and he move in together, further solidifying their relationship but maintaining the constant air of confusion as to how truly committed they are to each other and the rules of the game they are playing.
The second year that they spend together adds little clarification as the two oscillate between one loving, while the other is running. WILL seeing he has everything and nothing in life decides to take a trip to get away from it all. He flies out to India for some time alone. Traveling and completing a Vipassana course.
At first, it seems difficult for WILL to handle the idea of losing CLAUDIA. He questions life and the meaning of love. It seems he is haunted in both his dreams and waking moments. Yet, it is on his journey, both time alone and meeting new people, places, and cultures, that he gets in touch with his true self. A self that feels connected to his childhood, to his current reality, and to his unknown future.
It is a connection that holds no ill-will but seems to enlighten what just is, and what should be no more. After the Vipassana course and his one month trek in Nepal, he becomes truly at peace with whatever may or may not await him at home.
WILL comes back to the ‘real world’ and it seems that all is well between CLAUDIA and him. But this fantasy is short-lived, as the new year begins with a final surgery for WILL that leaves him bedridden as he watches CLAUDIA walk out on him.
CLAUDIA and WILL continue to sleep together despite the breakup and seeing other people at the same time. During that time, CLAUDIA reveals a letter she had written before his trip to India and had hidden inside one of WILL’s books. After reading the letter, WILL  reflects on all that passed between them and feels closure on his relationship with CLAUDIA.
Despite the seemingly calm end of this part of life, he goes through a transitional phase of heavy drinking, drug abuse, one-night stands, and desperate attempts at finding love. It is in this time, that he tries to find the balance between the mystical experience that was Nepal and the merciless and unforgiving world of scared, selfish humans, all just trying to get by however they can. This attempt at finding balance leaves WILL feeling pulled in two very different directions and with nothing to hold on to that leads to a depression that nearly takes his life.
Eventually, he starts to recover and find peace again in steady work and a new chance at love. The story ends with WILL still as confused as ever about what he wants from life and what is the right path for him. It ironically closes with a phone call from CLAUDIA. 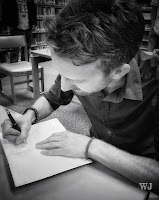 Being a former Airman, Legionnaire, and English teacher, I have spent just as much time creating stories as I have spent writing them. This first novel is loosely based on my own personal experience with enough liberty taken to call it contemporary fiction. Having always had writing in my life as a form of therapy and being the broken soldier that I am, I have fully committed to what I believe to be my role in this play of life, a writer.
Amazon / Goodreads 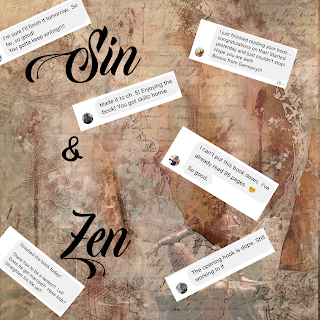 Matt stayed. I felt him leaning in that direction from the dinner the night before. I wasn’t feeling that much better, but I just didn’t want to stay in the same place for that long when we were only halfway up climbing up the hill. This lake I had only heard of also enchanted me. It seemed more worthy to see, to achieve than just walking over a mountain pass.
I packed my bags planning to head out on my own. I was disheartened by leaving my pleasant company, but something drew me much more than companionship. As I was waiting downstairs to say goodbye to Matt, Cathy came down packed and said she was coming with me. I could see almost a pang of lost love in Matt’s eyes.
Not a romantic love, but a loss of something that didn’t see the end he had envisioned and hoped for. He made a few ‘Are you sure?’ attempts to ask her to stay, and I could see the discomfort in her to tell him ‘Yes.’
They had been together since they met on a website to meet fellow trekkers in Kathmandu. They had each come on their own, but came together almost immediately and just as quickly made their plans together. It was nice to see people come together like that and I was glad to have been a part of it, even in a spontaneous, add-on sense.
I felt guilty too, since it was Matt that invited me along and had me join his team, and now I was splitting it apart. Matt would leave the next day to continue on the path to the pass, which would put him ahead of us. We spoke hopefully and optimistically about crossing the pass together and how he might wait for us at one of the base camps for such a reason. Though it was no promise, and none of us assumed it was such.
We said ‘See you soon,’ but we meant, ‘Goodbye.’ Cathy and I left. It would be a full day getting there. Longer than any day we had had so far. Up to this point of the trek, we had only walked about five hours a day with breaks in between, sometimes frequent and sometimes long. It made a day, a short day, but a day. I felt confident with my drive and her steadiness. I imagined getting there, running up the mountain, and then getting back on track without a loss of breath or time. I felt that way until the first two hours were over. Up and down and up and down. Was it left or right here? Was this even a trail? My motivation became a desire just to get to the base camp before it snowed too heavily.
#
There were two villages we passed along the way that provided a place to stay for people making the trek, but the steady tortoise won the race. ‘Good to go?’ I would ask.
A smile and ‘Yep.’ The trail was windy, cold, and the last leg of it involved walking across a landslide area. Considering that there was not even enough trail to put one foot, I wondered how the villagers brought large cattle or supplies through here.
I kept imagining one little rock turning into an all out landslide as we walked across it. The entire mountainside was nothing but small rocks. Forty-five minutes of leaning against these small rocks so as not to be blown off the inch-wide trail by the extreme wind and gusts, I looked down and envisioned the fall quite a lot. It would be one hell of a slide. One hell of a ride. We made it.
We arrived at Tilicho base camp, got our shack, and then headed to the common area where we found Friedrich and Aviva. The common area was like many other places we stayed at. It was a large room with a kitchen in the back. It was the only room with a stove to heat the area and it is where everybody who stayed there would stay until it was time to go back out to their rented shack and sleep in their sleeping bags.
There were people scattered around the open space, some at tables reading, some at tables eating, and some at tables drinking tea and staring at the larger concentration of people near the front of the room. This is where we found Friedrich and Aviva. There were probably a dozen people in this little circle. Friedrich was under the weather. They had just finished their climb to Tilicho Lake that day and already come back down.
Friedrich was now feeling the wrath of Acute Mountain Sickness. I believed his story. He didn’t seem the type to use it as an excuse. He had himself curled up on the floor with a jacket over his head. It seemed mostly like a headache, but he couldn’t eat and was having some nausea. I believed more than anything his ears were the worst of it. He was happy to see us, but hid under his jacket most of the evening before finally heading to bed.
Original link