Meet Kat Henry Doran and Read About VENGEANCE IS MINE, her Contemporary Romantic Trilogy

About Kat
Legal nurse consultant, victim advocate, sexual assault nurse examiner Kat Henry Doran  and her alter ego, Veronica Lynch, has been there and done that—many times over. She often travels to the wilds of Northern New York State, witnessing the wonders of mother nature at her best. From the shores of Lake Ontario and the Saint Lawrence River to the historic Adirondack and Catskill Mountains, she creates stories featuring strong women and the men who love them.
When not writing, she can be found lashed to one of her sewing machines—or chauffeuring the four brightest stars in her life: Meredith and Ashlin, Owen and Kieran. 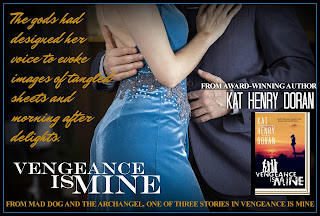 About VENGEANCE IS MINE
Ever think about going back to study hall to face down the school bully?
The mean girls?
The brainless jocks who made your life a pure misery?
For Dru Horvath, gypsy orphan turned Pulitzer Prize winning photo-journalist; Rafe Archangeli, Scourge of Summerville who now heads a multi-million dollar trust; and Fiona “Fat Aggie” Thorpe who recreated herself into an A-list model with her own A-list agency, the opportunity to exact revenge is too good to pass up.
Will they find the vengeance they crave?
Or something more valuable? 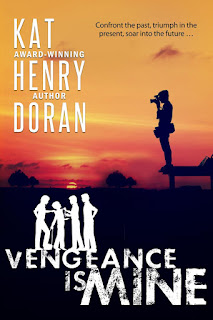 Excerpt
“Tough way to find out about the other woman.”
“Other woman, hell,” Dru groused. “The assistant was some young stud from Tommy's gym with abs to die for.”
With that. she side-stepped him and reached for the knob on the bathroom door.
Fast on his feet, Rory's counter move brought them nose to nose. “Play much poker, Horvath?”
“I don't know what you mean.”
“Before you started trash talking the cheating ex-husband, your face lit up like the Fourth of July. That tells me you've got something stashed in the tote. Until you let me look inside, it stays out here.”
Clutching the canvas tote to her chest, she sneered, “The only thing in here is my outfit for tonight's event. If you think I'd go naked, one of us is a couple fries short of a happy meal.”
His response came in the form of another gimme motion with those thick, blunt fingers. “How about I close my eyes if I encounter any lacy unmentionables?”
“As if.”
She knew the instant he found the back-up phone. The screw-you look morphed into a smirk. “It's not smart to mess with Homeland Security, sweetie. Those guys eat small rodents for breakfast.” 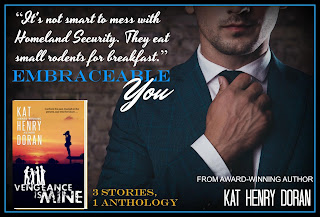 An Interview with Kat