Meet Diane Bator and Read About “Drop Dead Cowboy,” Book 1 of the Sugarwood Mysteries, Just in Time for Halloween!

Every year I gather at least a dozen ghosty, spooky, creepy and paranormal books for October, and in between watching all the paranormal TV shows, I read them. Here's another, by my guest Diane Bator.

Diane is the author of several mystery novels—and series. She’s a member of Crime Writers of Canada, Sisters in Crime Toronto, International Thriller Writers and the Writers Union of Canada. When she’s not writing, she works in a small, professional theatre which will one day be subjected to immortality in a whole new paranormal mystery series. 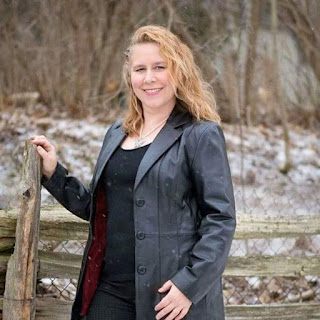 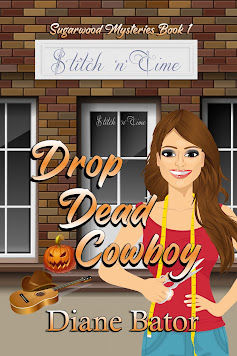 I wrote this book during NaNoWriMo 2019 where you push yourself to write 50,000 words in a month. I did it, and then some, with a push from a great friend! I spend the next couple months editing, expecting it to be published in September 2020. Then Covid hit and my publisher moved it UP to June since I’d already finished and submitted it!

This November for NaNoWriMo, I’ll be working on Book 2, currently titled Spirted Witch which is a Christmas book.

Audra Clemmings loves Halloween. At least until she sees the display of voodoo dolls in the shop next door that resembles nearly everyone in Sugarwood, Ontario—including her.

Merilee laughed as she walked toward the storage room for another box. She returned with a large, tattered cardboard box. “I thought you were going to put up these decorations. Weren’t they your dad’s?”

The instant I saw the childlike scrawl of crayon across the side of the box, I sighed. “Yes. My mom dropped them off for us to use in the store window, but I wasn’t sure what to take out. Some of them are pretty old. Go ahead and use what you want.”

“Okey dokey.” She pawed through the beat up box and came out with a yellowed skeleton about a foot tall. “This guy looks kind of fun.”

“That’s Herbert. The kids might like him. He always gave me shivers,” I said. “I suppose we can put him up in the window. There should be a metal stand he hangs from.”

Merilee cackled. “Bwahaha! Come with me, Mr. Herbert. You are getting a place of honour in the front window.”

I chuckled then paused. “You didn’t finish telling me what Miss Lavinia put on the bench out front.”

She placed Herbert in the window then spun around and clapped her hands. “Oh right. It’s not a what so much as a who. This morning, there was a drop dead gorgeous cowboy out there playing guitar.”

“Playing a guitar?” My mouth fell open. “Is he like one of those mechanical things you can buy at the hardware store?”

“How is a cowboy playing a guitar Halloweeny?” I asked.

“Have you ever had an earworm?” Merilee returned to rifle through the box some more.

I slid several skeins of cobalt blue embroidery thread into their own cubby then tossed the small white box toward the counter. “A what?”

“An earworm,” Merilee said. “You know. One of those songs you hear that gets stuck in your head all day and when you’re trying to go to sleep at night. Don’t forget to save those boxes for Miss Lavinia.”

“Oh no! Do not tell me what song you heard.” I covered my ears. “I don’t want it stuck in my head all day too.”

“See. They’re scary,” she said. “Anyway, I heard that cowboy playing a song on my way here this morning and now I can’t get it out of my head. The funny thing is, I’ve never even heard the song before. There’s this one line…”

When Merilee stopped talking, I glanced up. “What is it?”

“‘Looking for her is like finding a needle in a haystack,’” she said.

I thought a moment. “You said he’s dressed like a cowboy, right?”

“So does that mean he’s looking for an old girlfriend, his dog, or his horse?” I bit my lip and struggled not to laugh.

Merilee’s eyes grew wide. “Could be his truck. I didn’t see a horse out there anywhere.”

We burst into laughter. Merilee pulled a few more items from the box. One was a costume that made my eyes well with tears. I turned away and put the box of embroidery threads in the bottom of the custom cabinet Merilee’s husband Tony had made us. Needlepoint was always my passion, and it took a tidy lump of money inherited after my aunt’s death to prompt me and Merilee pitch in to rent a tiny store front on Main Street.

Stop by https://bookswelove.net/bator-diane/ to learn more about Diane's books and for buy links!

Blog (which features Escape with a Writer!)