Meet Diana Jackson and Read About MISSING Past and Present, A MYSTERY INSPIRED BY HISTORY

About Diana
After six years in the wilderness, (wandering the Fife Coastal Path and finding her way back to writing, to be precise!) author Diana Jackson is about to launch the second novel in her Mystery Inspired by History series. A retired teacher of sixty one years, Diana Jackson has published five works since 2009. Her first, historical romantic fiction, Riduna, set in the Victorian era, was published by Pegasus Elliot Mc Kenzie in 2009 but was re-launched by Eventispress in 2012 - a writer’s indie collaborative publisher, through which all her other works have been published:
2012 Ancasta, Guide me Swiftly Home ~ Riduna’s sequel
2013 The Life and Demise of Norman Campbell ~ a memoir
2014 Murder Now and Then ~ a mystery set in two time zones, 1919 and 2019
2017 The Healing Paths of Fife ~ a personal fantasy memoir
After moving to Fife from Bedfordshire in 2014 Diana has had a break from her life as an author to settle into her new life within the Kinghorn Community. The Healing Paths of Fife tells of that journey. Rejuvenated, she finally turned to finishing MISSING, Past and Present.
Diana writes, ‘This novel is special to me because it is influenced, in part, by my experience volunteering in a soup kitchen in Bedfordshire and also at a local food-bank here in Fife. My experience as a course team leader and personal tutor at a College of Further Education in the heart of Luton and a teacher of English as a Second Language is also reflected, where I gained valuable insights into social issues and difficulties some young people of today face.
Connect with Diana
Website
https://dianamj.wordpress.com/Blog
Twitter
Facebook
About MISSING Past and Present 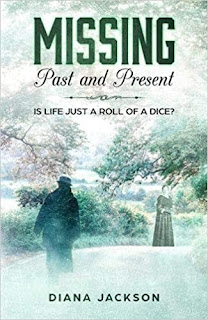