Jul 22 Posted by Diana Rubino in Historical
I met Barbara when I read about her debut time travel novel THE LINCOLN PENNY. A huge Lincoln and Civil War buff, I couldn't resist buying a book with that title. See my Amazon review here.
I thoroughly enjoyed it, and now Barbara is my guest.

Barbara began her career as a copywriter and artist with over twenty-five years in the fields of Marketing and Graphic Design. Beginning in 2014, she took her love of writing to new heights with her debut novel, "The Lincoln Penny." In the following years and as her loyal readers asked for more, "The Lover's Eye, Book 2" and "The Celtic Key, Book 3" were released in her time travel trilogy. Barbara's novels reveal her genuine passion for history and innate ability to blend authentic detail with imaginative speculation. Living history, firsthand, she is an avid American Civil War reenactor whose need to bring the past to life eventually formed the backdrop for her absorbing and heartwarming tales.
About THE LINCOLN PENNY 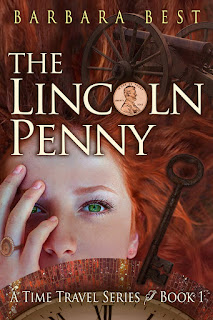 History geek Jane Peterson, a small-town girl with a passion for antiques, has hit the refresh button on her life. She breaks ties with her childhood home and gives up on love to live in Savannah, Georgia, a city she is drawn to like a moth to a flame.
Landing her dream job, Jane makes friends and takes up a new hobby. Participating in a weekend Civil War reenactment with her co-worker, Sophie Downing, a devastating event thrusts her into a raging siege with brutal consequences. The year 2012 suddenly resets to 1862, during the bloodiest conflict in American history.
Jane's ghostly appearance is a bad omen to the doomed Confederate soldiers at Fort Pulaski. In a chilling twist, the charitable heart of a handsome lieutenant and arrogance of a Union general decide her destiny. She must cross hostile enemy lines and seek shelter with strangers. Cradled in the antebellum home of Lieutenant Hopkins’ family, lost and homesick, she struggles with her unbelievable circumstances.
Testing her modern-day experience in a primitive environment, Jane finds the lack of simple hygiene and practices of nineteenth-century medicine appalling. She challenges the attitudes and restraints forced upon her and all women of the period. She puzzles over a mysterious force that is powerful enough to turn her life upside-down.
In a story of good and evil, murder, intrigue, and the supernatural Jane must find a way to survive one hundred fifty years from everything she knows. And there is no escape from the grim truth. Her existence in the past alters the future and puts lives in danger.
Jane Peterson has vanished without a trace! Bryce McKenzie, a hard-driving pre-med student at the University of Georgia in Athens, has been Jane’s best friend since third-grade. They share a unique bond. But when did she capture his heart? Refusing to accept the possibility Jane is dead, Bryce vows never to give up on the woman he loves. With help from Sophie Downing, the only witness to Jane’s freak disappearance, he searches for the key to unlock an impossible mystery.
Excerpt
The hearty male guffaw that follows jerks Jane fully awake. An involuntary “oof” leaves her lips as she props on one sore elbow. She takes a deep breath to draw strength and calls, “Hey, out there.”
Dead silence.
“Hell-lo,” she sings irritably. Rolling to her side away from the wall, Jane pushes up to her knees.
“Am I hearin’ things?” comes Jeb’s rickety whisper.
“Hush!” the other clips, all joking aside. “Not another word, Jeb, ya hear. Watch’is door. I’ll be back.”
Jane feels rocky. Her dress is all over the place, but she manages to stand. Sticky dampness makes her shiver. The chill creeps under her clothes and she hugs herself. “My cape! Good Lord, Sophie’s goin’ to kill me.” Jane searches blindly, using the toe of her boot and not wanting to stray too far. She suppresses the fear of something crawling up her leg.
“Not funny,” she croaks her frustration at the barrier between her and the outside. Her throat is scratchy and her mouth tastes bitter. Not caring to wait, Jane feels for a door handle and finds one. She tugs the outline of a cool iron ring. Leaning, she thrusts forward with her shoulder. Her weight is no match for the heavy obstacle. “Seriously, open up and let me out of here!”
Jane rests her head against the hard wooden surface. Fortunately, it is not long before there is an absurd amount of scrambling on the other side. Among throaty grunts and scuffing sounds, she can hear objects being shoved across the floor to make way.
“Stand ready,” a gravelly voice orders in a thick Irish brogue. “Well, go on. Quit acting the maggot and open it. Careful now, gentlemen.”
The door creaks ajar and swings wide. Dim, dusty light inches along the floor where Jane has instinctively planted her feet to brace herself. For what, she is not sure.
“Step out.”
Jane’s eyes slowly adjust to her predicament. A row of muddy men in shabby garb huddle nervously, looking every bit like a gaze of wide-eyed raccoons. Three, have rifles drawn, the tips of their lethal bayonets pointed in her direction. She cautiously steps into the adjoining room with her hands up and feeling totally ridiculous for doing so.

Coming Soon: Books Two and Three of the Trilogy

The Lover's Eye: A Time Travel Series, Book 2 — A heated clash between modern-day thinking and nineteenth-century ideals emerges as Jane Peterson and Bryce McKenzie struggle to exist in 1863 war-torn America. Follow Jane as she lets go of her past, endures great hardships and makes tough choices that will alter history, including her own, forever. Encounter shocking truths Bryce must face in his harrowing search for Jane and the ominous plot that involves him in an unbelievable event. Discover the dark secrets of a supernatural force that will sweep you back, once again, to the vibrant people of the past and bloody backdrop of the American Civil War.
The Celtic Key: A Time Travel Series, Book 3 — Hop times and span continents in this final journey that unravels an incredible mystery and turns the course of history upside-down. Answering a call to duty, Jane and her Confederate Major are compelled to carry extraordinary facts to a famous General. In the midst of a tumultuous event and raging Civil War, their plans go terribly awry. Hit hard by tragedy, Sophie Downing's escape from an age-old faction plunges her deep into the dangerous ploy of an unknown enemy. She is stunned to learn her real destiny lies in the life of another. Heartbroken and disease-ridden, Bryce McKenzie returns to the future. Because of dramatic revelations and unfathomable change, he becomes convinced of his deep-seated connection to Jane. Are their lives forever entwined?
Purchase THE LINCOLN PENNY
Kindle
Paperback
Connect with Barbara
Website
Facebook
Twitter
Original link