It lulls me into a sense of security, which I suspect is false

Romance
Uvi Poznansky
I miss my son, in a way I have never missed him before, knowing that he is not, and never will be, the man I expected him to become. The kiss I never got from him must be rejected, it must be held back by distance, which I must increase, because if I ever face him again, one of us will die.
I have expected his forces to arrive already, but they are not here yet. Now that we have mules to carry us, our escape is somewhat faster. Still I continue to worry that it is not fast enough. And so, on and on we go, under the cover of darkness, with barely any sleep.
At midnight we arrive at the Jordan river. We walk along its bank, and hours later catch a first glimpse of something magical: a haze rises there, over the Sea of Galilee, lifting away the edge of gloom. The glassy surface turns the landscape of the opposite shore upside down, and makes the glimmering of stars twinkle in the water.
In the distance, boats of fishermen seem to float over the deep blue. This is a tranquil, dreamy sight, one that invites us to a much needed rest. It lulls me into a sense of security, which I suspect is false.
Excerpt from The David Chronicles: Trilogy 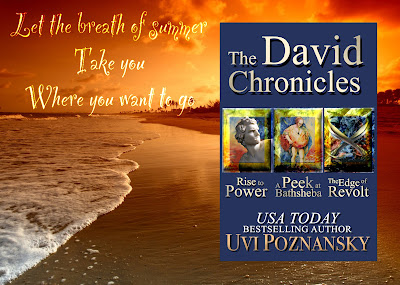 Volume I: Rise to Power

Here is the story of David as you have never heard it before: from the king himself, telling the unofficial version, the one he never allowed his court scribes to recount. Rooted in ancient lore, his is a surprisingly modern memoir.

Volume II: A Peek at Bathsheba

The most torrid tale of passion ever told: David's forbidden love for Bathsheba, and his attempt to cover up the scandal. Will he muster the strength needed to protect her and save their son from danger?

Volume III: The Edge of Revolt

David loves his sons. The last thing he expects is that they will topple him from the throne. Who among them will remain by his side? Who will be not only loyal, but also eager to continue his legacy? 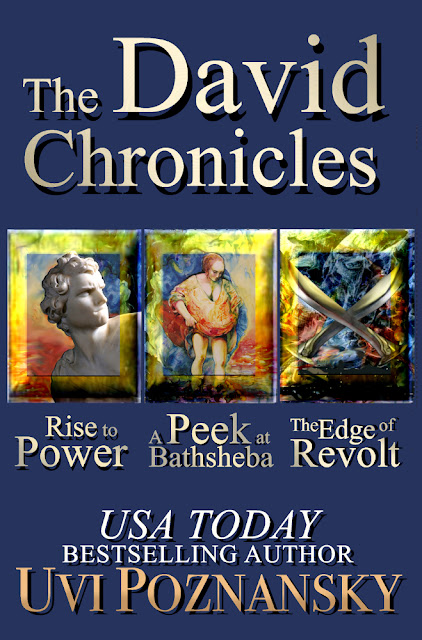 "The miracle of Uvi Poznansky's writing is her uncanny ability to return to old stories and make them brilliantly fresh."
- Grady Harp, Hall of Fame Reviewer

More posts from author
Wednesday, 12 August 2020 Silence is golden. It allows me to listen, to gather clues
Sunday, 09 August 2020 I must get him to lower his defenses, so I may gather clues about his past
Wednesday, 29 July 2020 Loved it