There are times the universe will ask you do something in return. Perhaps as payment for the sunny days, the healthy days, the perfect days.
Your resolve doesn’t waver during these times. You focus and follow through and accomplish what is needed with a flourish and a smile.
Later, as all of it comes together and rises to fruition, you wonder how the heck it happened. What made you do it? How in the world was all of it possible?
Your eyes pop open in the middle of the night and you realize this is beyond your doing. You are merely a stronger tool displaying as much grace as possible. A cog in a mighty wheel. A note in a song. A drop of rain in a bucket. 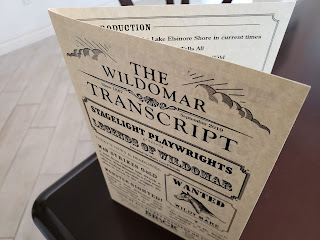 This Saturday, The Legends of Wildomar-Tall Taleswill be acted out on stage at Le Grand Playhouse. I wrote one third of the play and two of the songs. I put together the program, had them printed, folded each one by hand with my husband and sister.  I also tried to encourage sponsorship's and inspired my family members to participate. I hung up posters in the park that blew away in the wind.  Since one actor dropped out, I’m double cast! The director wants me to be funnier. I’m expected to change into boots, chew on hay and know my lines. Huh?

The address is 16275 Grand Ave., Lake Elsinore. The play will be on September 7th and also on the 14th. Tickets are $10 and are available by going online to BRICK or at Facebook events at: https://www.facebook.com/events/2396311220655774/.
All the ticket proceeds will be going to BRICK, which stands for Brain Research in Cancer Kids which is an affinity of Rady’s Children’s Hospital.
BRICK was started by a family with a toddler, named Les. His grandmother is a friend of mine. Les had a brain tumor that changed his life. He endured countless hours in the hospital, surgeries, radiation, chemotherapy and pain. Most of those things began over 16 years ago.
This Saturday, I am honored and humbled to hear that Les and his parents, will be taking tickets at the door. This is not a tall tale and I have no words.
Original link