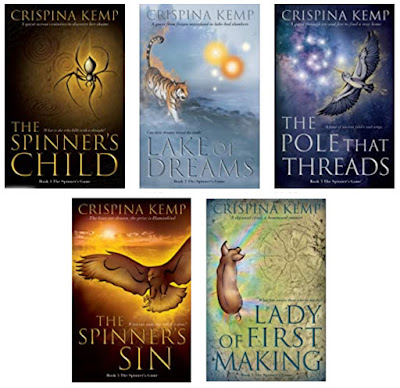 Spliced with dark material, sprinkled with the mystical, Kerrid journeys through the timeless first days… and into the Spinner’s Web. Cursed, friendless and shunned, fraudulent seer Kerrid, born of a fisher-hunter clan, holds two beliefs. That in her psychic abilities and exuded light she is unique, and as Voice of the Lady she’s exempt from an arranged marriage. Both convictions are shattered when nine boats arrive from the east carrying the ancient Chief Uissinir who wants her for his wife, and five of his sons who emit lights and share tricks like her own. Forced to make an unwise judgement, a trail of death follows.

But questions plague her. Why does she dream of babies dying? Why does a voice in her head taunt her: Suffer the loss, suffer the pain? And what is she that no matter how lethal the wound, she does not die? What is she to kill with a thought?

The five books of The Spinner’s Game, set in the between-time, when hunter-gatherers turned to settled agriculture, when spirits and demons morphed to gods, takes Kerrid’s story across continents and weaves through ages fraught with floods and droughts to become the prototype of our most ancient myths.
Kerrid. In the Beginning
Kerrid as a concept was born way back in 2006 as the antagonist in an alternative narrative of the change from Neolithic to Bronze Age (The Hare and the Adder, still on back-burner). In the process of writing, I realised that Kerrid needed a backstory to explain her presence at the westernmost edge of Europe, her longevity and powers, and why she was set against the story’s MC. Thus, began The Spinner’s Game, to provide that backstory. It wasn’t intended as a five-book series.
In the Beginning, its first working title, grew from a single volume, to a trilogy. By then I’d realised that an unknown writer with a trilogy set in the mists of prehistory hadn’t a chance of acceptance by a traditional publisher, and as yet KDP was still in its infancy. In November 2012 I decided to post the trilogy, now renamed Feast Fables, to blog. Meanwhile I was writing additional stories set in the same milieu and sharing some of the characters.

It took three years to post that trilogy. And I still wasn’t content. It was ‘out there’, but it wasn’t widely seen. I took a deep breath and plunged into prepping for Kindle publication. In the process what had been the Feast Fables trilogy became the five-books of The Spinner’s Game – The Spinner’s Child, Lake of Dreams, The Pole That Threads, Lady of First Making and The Spinner’s Sin.

On the Matter of Names
Keen as I am on Celtic mythology, it’s no surprise that I named Kerrid for the Welsh goddess Cerridwen, and that before I created her story. Cerridwen has a Cauldron of Inspiration, which is also the cauldron of rebirth and immortality. It suits my Lady Kerrid.

As to The Spinner… I love word-play and have a passion for textiles. I liked that The Spinner might be a spider spinning its web or she might be the person who spins thread from the fleece. If the latter, that spinner spins a yarn… i.e. a tale. If the former, that spider spins a web to entangle, delay, hold captive, and ultimately to devour. I liked that the Spinner might be both creator and destroyer. The word ‘web’ too is loaded with imagery. The Spinner’s Game is woven through with this imagery.

The Mythological Framework for The Spinner’s Game
The entirety of The Spinner’s Game is a myth, taken apart, twisted, spun and woven anew. I enjoyed creating the fables that feature throughout, an amalgamation of many the myths I have read over the years, distilled to their essence and simplified.

What’s the difference between a fable and a myth? A myth is a story, a fable is something said at the time of the feast. At Christmas we talk of Santa, his flying reindeer, his helpful elves, but there is no story. At Easter, we say of the Easter Bunny hiding its eggs. At Halloween, we speak of witches and goblins and the awakening dead. While these have roots in ancient rituals and beliefs, they are not myths. They are feast fables. And so too with Kerrid’s people. Everyone knew the Lady’s sons had cut up their mother to make the world, but few knew the underlying myth.

Before the belief in the gods, there was a belief in an all-pervading ‘Spirit’, a belief that today is regaining ground in the West while it never really diminished in non-industrialised societies. For Kerrid’s people that belief includes the notion of agency in which Spirit, now coalesced into discrete entities, is able to act of its own volition. With the relevant gifts, these discrete entities – divines – might be made to act on the donor’s behalf. But who knows which gifts might oblige them? While knowledge of the more common gifts – e.g. a slop of brew for the Lady of the Hills will keep her sweet and not convulsing – anything out of the ordinary requires a specialist. Those specialists – call them shaman, witchdoctors, wisemen – while feared, were also revered. As The Spinner’s Child opens, Kerrid is acclaimed a Seer; this keeps her safe, for the alternative is she’s demon-possessed. And the role of a demon is to destroy. As Kerrid says, it’s what they do. They cause disease and rot.

Plans for the Future
As already said, there are five more books that share some of the characters from The Spinner’s Game, three are set in the same milieu, two are time-slip fantasies that move between medieval and contemporary setting. The first of the time-slips, Learning to Fly, is now with beta readers; I hope to publish in time for Christmas 2020. Meanwhile I’m revising Alsalda, a story which, along with another as yet untitled, replaces that long-ago Hare and Adder.

Crispina Kemp
# # #
About the Author 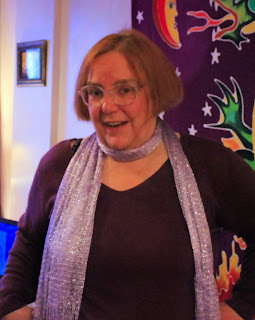 Crispina Kemp says, 'Failing to find a place on the space programme – to boldy go – I turned my vision inwards to a study of psychology and exploration of spirituality. This encouraged an outward journey to explore this wonderful world, its peoples, its beliefs, but mostly its pasts. From the exploration I returned with the core of my writing. But, for the more mundane-minded: For a shy child with a speech problem, the written word came as a release, enabling me to express myself without being asked, ‘Eh? What did you say? Say again?’ I wrote my first ‘proper’ story when I was nine. A gothic offering to scare my friends. Since then, there has been scarcely a day when I haven’t been busy writing. Novels. The short story form doesn’t appeal to me, although over recent months I have posted micro-fiction on my blog. In my early teens, I visited Grimes Graves, the Neolithic flint mines in Norfolk. The following summer, I visited Stonehenge in Wiltshire. Thence began a lifelong interest in the archaeology of prehistory. The study of myths and legends seemed a natural progression, and from there to linguistics (despite my inability to pronounce the words). Resident in Norfolk (UK) where my roots dig deep, my regular rambles into the surrounding countryside provide balance to the cerebral… and ample subjects for my camera.' Find out more at Crispina's website https://crispinakemp.com and follow her on Twitter @crispinakemp1
Original link