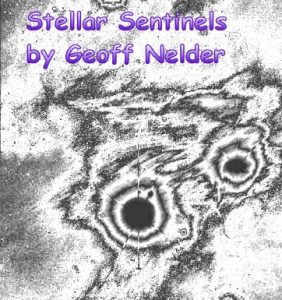 Science Fiction first contact short story submitted to the Writer’s of the Future Award in 1987. It didn’t win but came close and was awarded an Honourable Mention and a hand-written note from L. Ron Hubbard.

Note this story is nearly all dialogue, the reason for which becomes clear in its reading.

‘What are you thinking, Jwerk?’

‘My brain hurts too much.’

‘Of all the time to get a blinder. Are you sure, Zatl?’

‘How can you be sure? We’ve not intercepted anything but clutter since we’ve been here?’

‘Clear your head, Jwerk. We were put here because the indigo and magenta gaseous entwining swirls would attract inquisitive strangers.’

‘That’s all very well for you, who never get blinders. It takes me ag — ‘

‘Zatl, when we accepted this duty we were told that the chance of interception was practically zero. More chance of two suns singing a duo.’

‘That means it came from sector 34. Nothing’s ever come from there.’

‘It’s not fair. It would come when I’m not in a fit state to receive it. I told them back at base I get these — ‘

‘I have too many important things to get on with in my life for this stupid compulsory duty. That sad Xfol was prepared to go in my place but oh no. I, Jwerk. My number was up.’

‘Of course. Regulations… there’s something odd.’

‘Let’s just report back and let Base handle it.’

‘Huh! It’s such a mess anyway. It’s time we found somewhere else.’

‘And, we have to find out where they come from. Yes, their thought transmissions are weird.’

‘Well what do you expect from aliens?’

‘No, Jwerk, it’s not just language differences it’s as if they were travelling in some kind of containers.’

‘You mean like those unfortunate creatures that Bqort encountered two duties ago Zatl, they killed him didn’t they?’

‘The inquiry hasn’t finished. It appeared that he thought they were dead or dying and he was trying to get into their container when it ignited.’

‘No. It must have been a communications failure. Surely sentient creatures wouldn’t destroy themselves deliberately. Can’t you help with DR3 frequencies?’

‘I suppose so. We should move apart though, just in case.’

‘Good thinking, Jwerk. I’ll drift to sector 180/24/D and start listening for their transmissions at the opposite end to you.’

‘Zatl, you are actually enjoying this aren’t you?’

‘Of course! Now let me do any dialogue, they might be clever.’

‘Are you still picking up three?’

‘Shush, they’ve slowed down. Stopped. But there’s nothing to indicate they’ve detected our presence.’

‘Perhaps they have more than one sense. Primitives.’

‘It could be useful to know how others might perceive us in a physical sense.’

‘Hey, Zatl. I told you I’m going if you keep up such perverted thoughts. And I’ll tell Base.’

‘Go then. Just a moment, I’m picking up a transmission on D25 ~ beamed straight at me.’

‘You’re right. Exactly what we were told they’d do. Hah! Shall we play?’

‘Yes, but I’ll wait until they finish their sequence. They’re bound to give us a few little problems to establish our intelligence.’

‘Let’s not wait Zatl. There is only one number series that they are likely to test us on that doesn’t occur in nature.’

‘I know, prime numbers. Anyone transmitting that series must be sentient. What’s on your devious mind?’

‘Only that we give them the answer before they ask the question. That’ll give them a shock!’

‘Of all the ectoplasmic wonders of our race I have to be paired up with you. My dear Jwerk, has the thought not tweaked your prosaic synapses that we ought not let others believe ourselves to be intelligent entities?’

‘Just suppose they’re malevolent. They might be able to travel faster than us and trick us into leading them to –‘

‘Take our silence as intelligent behaviour and follow us home anyway? I don’t think so.’

‘No Zatl, and stop conveying your thoughts as if they were mine. I was going to say, wouldn’t they refuse to communicate with us for the same reason?’

‘Too late. Their speed, formation and signals have already indicated sentience. Nevertheless, the thought must have occurred to them that it is dangerous to take strangers back to their home.’

‘Why? If we can prove our benevolence and if…’

‘No, my dear Jwerk. Suppose they make a mistake and we were evil… and even if we were not evil it would be too coincidental if our stages of development were equal, wouldn’t it?’

‘So, we could show them a thing or two.’

‘And then what? Suppose we solved all their problems; of science, medicine, mathematics, the perfect music. They would lose the urge to develop and progress and probably see no purpose in their lives.’

‘But we don’t know all those things.’

‘No, but they might think we do and even if we only helped them a little then the lifelong struggle and urge to experiment and be proud of one’s own achievement is dented for ever. Besides –‘

‘You’re painting a gloomy picture. What besides?’

‘Two alien species in close proximity are very likely to infect each other with some disease or other.’

‘So we are not going to communicate with these three container-things?’

‘Think, my friend, we need to know who they are; stop them from exploring our base region; and find out if they posses any useful infomation. Besides.’

‘Life is a game, and we are winners aren’t we?’

‘But it means we’ll never be able to go home in case they’re following us. Doesn’t it, Zatl?’

‘Killing off inquisitive strangers isn’t one of our jobs, surely?’

‘Well, Jwerk, it might not come to that. There is another solution but let’s give them something to think about now they have stopped.’

‘Right, I’ve interpreted their transmission of squared number series by pulsing the first hundred prime numbers in base eight and again in base ten.’

‘Good. That will tell them that we are tuned in. Wait now, Jwerk.’

‘What are they doing Zatl?’

‘Shush. They are thinking.’

‘No, Jwerk, aren’t you picking up coherently yet? The three containers are communicating on a different radio frequency to the one they beamed to us.’

‘Are they talking about us?’

‘What do you think?  Just a moment, they’ve finished. They’ll be transmitting to us next. Get ready to decode.’

‘Wait… Didn’t you attend coding courses? Another few seconds worth. Got it!’

‘Their decoded message on frequency F65 I’ll relay it to you.’

‘That’s good. We can learn a lot from them without giving away much in return.’

‘They’re fools if they think that we’ll point them to our home base tell them no Zatl.’

‘Well, we could ignore the question or… listen.’

‘Zatl! What are you doing?’

‘Steady, you’ll rupture a synapse. Their idea of ‘close’ is undefined so I’ve really told them nothing.’

‘Well Zatl we know what we need to know. What do we do now, destroy them?’

‘We do not know that they have not played a bluff. Calculate what data we have for those co-ordinates while I stall them.’

We do not have a home planet in the same sense that you seem to have.

We do not need to have a solid base.  Our kind gather as a home location.

‘Come on Jwerk, what is there?’

‘I can’t… yes, there is a small solar system there. There’s been an exponential growth in radio transmissions from the third planet over the last time unit after nothing for the previous billion. No confirmed details though.’

‘Right, Jwerk, let’s find out what they want.’

Is there some resource you are exploring for?

‘That’s all we need, a species that cannot be content with what it has. I have a nasty feeling about this one, Zatl’

‘I agree. This lot will not return empty handed but their thirst for knowledge could help us to get them away from our base. I have to do some persuading to let one of us go back with them.

‘Not me! I volunteer to return to the beacon point to transmit your martyrdom.’

‘I thought you might, Jwerk, but you would have to follow at a discreet distance to relay my transmissions.’

‘Ah, you don’t expect to return yourself?’

‘Would you let an alien gain detailed knowledge of military capabilities, scientific developm…’

‘To lead these potentially dangerous aliens away from our species and — ‘

‘Don’t tell me. So that you will be remembered as Zatl the Great One.’

‘Shush, I must answer them.’

We must both have concepts that are not mutual. We are prepared to share our knowledge with you.

‘I felt the detonation. Were they not pleased that you offered to go with them, Zatl?

‘Were you able to get into one of their containers with them, Zatl?

‘Base said we are all to relocate: it’s getting too busy around here.

‘Zatl, they’re going to send a team to those co-ordinates you got. So you will have some company for when you come back won’t you, Zatl?

‘You are getting this?

Is this THE END

Last month Solstice Publishing released my short story, The Chaos of Mokii as an ebook. It’s the first short for which I had to write a blurb, acknowledgments and select a cover art. Previously, I’d done all that for novels of over 80,000 words rather than a tale of only 3,400 words. The blurb? Mokii is a city existing only in the consciousness of its inhabitants. Olga is sitting in a train while her minds negotiates past Mokii’s bouncer and relaxes into the entertainments and infrastructure of the mind-city. She discovers a thief about to usurp the city in order to take its lucrative telepathic advertising. Does she thwart him? Yours for 99 pence or a dollar 22 cents to find out!

Grab it on Kindle http://mybook.to/ChaosOM 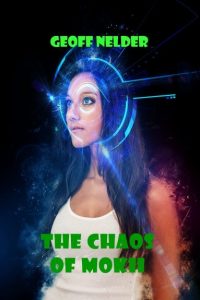 Links to buy ARIA and other of my books are on my Amazon author pagehttp://author.to/Amazonauthorpage

ARIA: Left Luggage is only 99p give or take a few pence at the moment on Kindle so grab it at smarturl.it/1fexhs

Or via other formats http://geoffnelder.com/project/left-luggage-arial-trilogy-part-1/