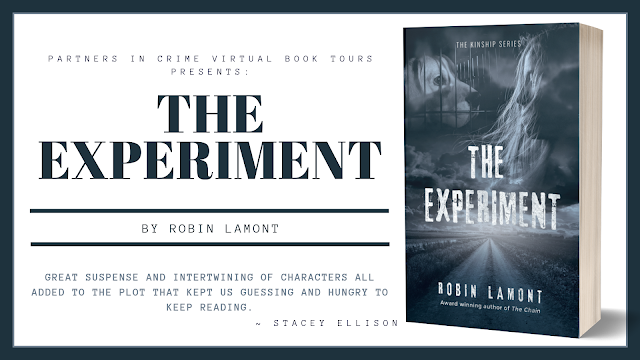 A rookie investigator working undercover for an animal protection group suddenly vanishes. But when his handler Jude Brannock goes searching for him, she discovers that he might not be who she thought he was. Determined to find the truth, Jude unearths a drug company’s deadly secret and is forced to confront some dark secrets of her own.

On tour with: Partners In Crime Book Tours 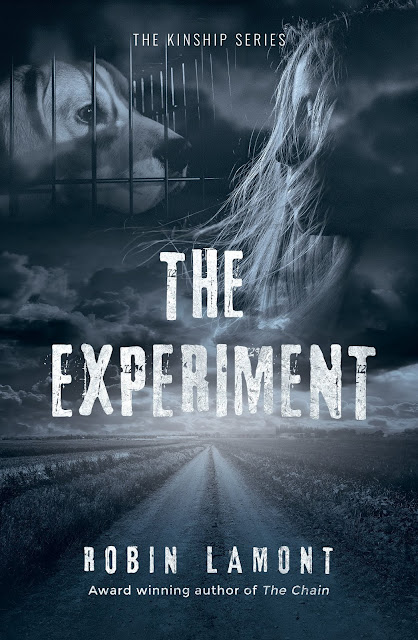 LOVE IT OR LEAVE IT WITH ROBIN LAMONT

Things you need in order to write: a clear idea of where the scene is going.
Things that hamper your writing: becoming too focused on details (like tiny pieces o dialogue) and losing sight of what’s at stake.

Things you love about where you live: walks in the park with my dog; the birds in the morning; being able to grow apple trees in the yard.
Things that make you want to move: the trip into New York City; not having take-out restaurants nearby; snow.

Things you never want to run out of: coffee; soy sauce; ideas
Things you wish you’d never bought: the last 3 items I bought online from China; an electronic food mixer; a can of stuffed grape leaves (in the cabinet now for 3 years).

Favorite beverage: a nice glass of Chardonnay.
Something that gives you a pickle face: tomato juice.

People you consider as heroes: people who save wild animals from poachers (actually, anyone who tries to save animals from being hurt).
People with a big L on their foreheads: The big L belongs on those who remain quiet in the face of cruelty and intolerance.

Last best thing you ate: a chocolate hazelnut cookie from Trader Joe’s.
Last thing you regret eating: some pineapple that had gone bad.

Favorite places you’ve been: Sicily; Edinburgh; London .
Places you never want to go to again: an emergency room, Las Vegas, Chicago in the dead of winter.

EXCERPT FROM THE EXPERIMENT

John Harbolt wasn’t easily shaken. With over forty years of medicine under his belt, there was hardly an injury, disease, or fatality he hadn’t seen, and he’d treated just about everyone in the small town of Half Moon at some time or other. But on that late summer day, young Tori Lacey showed him something that baffled him. Her symptoms were inexplicable and downright scary.
She was his first patient of the day, a young woman who had battled her weight for years. In between the earaches and the sore throats, Harbolt had gently counseled her about diet and exercise. He hoped she wasn’t here to ask him about diet pills again, because as far as he was concerned, they were off the table.
After removing her file from the plastic holder bolted to the outside of the examination room, he adjusted his wire rim glasses and straightened his lab coat. The younger doctors often wore khakis and a short-sleeved shirt at work, and maybe it put the kids more at ease. But Dr. Harbolt stuck with a freshly starched white coat, believing that it made his patients feel more confident in his abilities. And confidence in one’s doctor was important to the healing process.
“Tori Ann Lacey,” he announced jovially as he shambled into the room.
“Hi, Dr. Harbolt.” The morose girl before him sat on the table. She had taken off her running shoes but left her sweatshirt and shorts on.
“I haven’t seen you for a while,” he said, noting with some surprise that she had slimmed considerably, her round face now leaner and more mature. “How is college life treating you?”
“Ok, I guess.” Her voice and posture belied this.
“What brings you here today, my dear.”
“I don’t really know. But we thought you should look at these.” She pushed back the sleeve of her sweatshirt and held out her arm for inspection.
There were several bruises that vandalized the translucent skin of her inner arm. Dr. Harbolt held her wrist and peering over his glasses, looked closely at the red and purple marks.
He pressed lightly on one of them. “Does that hurt?”
She shook her head no.
“What happened?”
“That’s the thing. Nothing happened. They just appeared.” She showed him another set of bruises on her other arm.
“Did you fall?”
“No.”
“Knocked into something?”
“No,” she exclaimed, as though he didn’t believe her. “My mom thinks it’s my diet. That I should be eating meat.”
“And you’re not?”
“No. I needed to lose five more pounds for the track team, which I was having a hard time doing, so I switched over to a raw food diet. And it really helped because I made my goal.”
“And you were selected for the team?”
She nodded, anxiously chewing on a nail.
“Congratulations. You getting enough protein?” he asked, studying the bruising and letting her answer drift past him. This wasn’t because of her diet.
She rambled for a moment about nuts and spinach, then peeled off her socks and lifted her bare feet to the end of the examination table. “And then yesterday after a run, I found this,” she said. “I didn’t even show my mom ’cause she’d freak out.”
Dr. Harbolt caught his breath. It looked as though someone had taken a baseball bat to the soles of the girl’s feet. Fiery maroon blotches screamed out some kind of violence. Three of her toes had turned a dark purple.
“Good Lord!” he blurted out. “What happened to you?”
“Nothing! I’m telling you nothing happened,” wailed Tori. “They just … showed up.”
***
Excerpt from The Experiment by Robin Lamont. Copyright © 2019 by Robin Lamont. Reproduced with permission from Robin Lamont. All rights reserved. 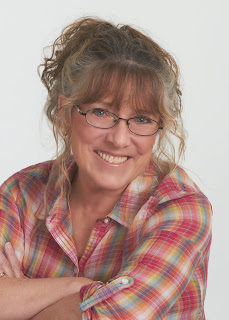 Author Robin Lamont’s diverse careers include Broadway actress, private investigator, and criminal prosecutor. Her novel If Thy Right Hand was named a Best Book by Suspense Magazine and awarded the Gold Medal in the Independent Publishers Book Awards. Her book The Chain, the first in The Kinship Series, was a Foreword Reviews Book of the Year Finalist. She lives in Connecticut with her husband and beloved Golden Retriever, Kaley.