How far would you go to make your dreams come true? For budding writer and filmmaker Noah Spaeth, being a Production Assistant in director Dominick Bambach’s new avant-garde film isn’t enough. Neither is watching Dominick have an affair with the lead actress, the gorgeous but troubled Nevie Wyeth. For Noah’s dream is to get both the film and Nevie in the end, whatever the cost.

On tour with: Pump Up Your Book

What’s the story behind the title of your book?
Slow Down is the theme of the book. The characters are moving and too fast a pace, which will ultimately get some of them killed. They have to learn to slow down to save their lives.

Where did you grow up?
New York City.

What do you love about where you live?
NYC is greatest place to live. There is so much to do all the time that you can never get bored. It truly never sleeps.

What is the most daring thing you've done?
Skydiving.

What is the stupidest thing you've ever done?
Skydiving.

What’s one thing you wish your younger writer self knew?
That rejection will happen, and you need to get a tough skin to make you a better writer.

What makes you nervous?
Driving a car.

Do you have another job outside of writing?
Adjunct Professor. Editor-in-chief of Fringe Press.

What would you like people to say about you after you die?
I made them laugh.

How did you create the plot for this book?
It came to me after getting fired from my first job after college.

Are you like any of your characters?
I’m a little bit like my main character Noah, or at least I was when I was 23. But I’m a much better person. I’m like Noah’s best qualities, not his bad ones.

One of your characters has just found out you’re about to kill him off. He/she decides to beat you to the punch. How would he kill you?
Probably slip something in my drink like Noah does in the book.

What book are you currently reading and in what format?
I’m currently reading Circe by Madeline Miller in paperback. I’m also reading Shantaram by Gregory David Roberts but it’s 1,000 so I’m putting it down a lot.

What’s one pet peeve you have when you read?
Bad writing. Terrible dialogue.

Do you have a routine for writing?
I write at a tree in Central Park when the weather’s nice.

Where and when do you prefer to do your writing?
Central Park in the afternoon.

Where is your favorite library, and what do you love about it?
The New York City public library on 42nd Street. It’s an amazing place.

What are you working on now?
I just finished a draft about a family of bank robbers in the 1980s. I think it’s my favorite book I’ve written so far.

OTHER BOOKS BY LEE MATTHEW GOLDBERG

The Mentor
The Desire Card
The Ancestor 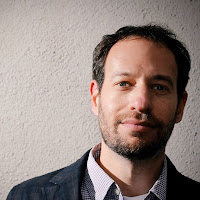 Lee Matthew Goldberg is the author of the novels The Desire Card, The Mentor, and Slow Down. He has been published in multiple languages and nominated for the 2018 Prix du Polar. The second book in the Desire Card series, Prey No More, is forthcoming, along with his Alaskan Gold Rush novel The Ancestor. He is the editor-in-chief and co-founder of Fringe, dedicated to publishing fiction that’s outside-of-the-box. His pilots and screenplays have been finalists in Script Pipeline, Book Pipeline, Stage 32, We Screenplay, the New York Screenplay, Screencraft, and the Hollywood Screenplay contests. After graduating with an MFA from the New School, his writing has also appeared in the anthology Dirty Boulevard, The Millions, Cagibi, The Montreal Review, The Adirondack Review, The New Plains Review, Underwood Press, Monologging and others. He is the co-curator of The Guerrilla Lit Reading Series and lives in New York City.

Buy the book:
Amazon  |  Down and Out Books