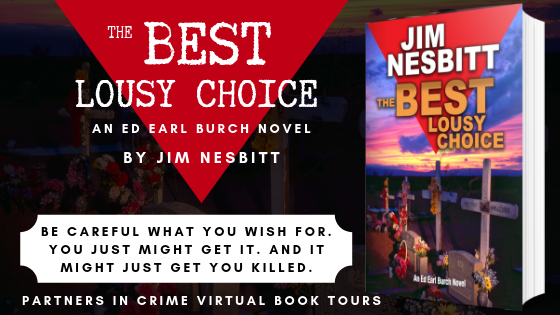 Dallas private eye Ed Earl Burch is an emotional wreck, living on the edge of madness, hosing down the nightmares of his last case with bourbon and Percodan, dreading the next onslaught of demons that haunt his days and nights, including a one-eyed dead man who still wants to carve out his heart and eat it.

Burch is also a walking contradiction. Steady and relentless when working a case. Tormented and unbalanced when idle. He’s deeply in debt to a shyster lawyer who forces him to take the type of case he loathes -- divorce work, peephole creeping to get dirt on a wayward husband.

Work with no honor. Work that reminds him of how far he’s fallen since he lost the gold shield of a Dallas homicide detective. Work in the stark, harsh badlands of West Texas, the border country where he almost got killed and his nightmares began.

What he longs for is the clarity and sense of purpose he had when he carried that gold shield and chased killers for a living. The adrenaline spike of the showdown. Smoke ‘em or cuff ‘em. Justice served -- by his .45 or a judge and jury.

When a rich rancher and war hero is killed in a suspicious barn fire, the rancher’s outlaw cousin hires Burch to investigate a death the county sheriff is reluctant to touch.

Seems a lot of folks had reason for wanting the rancher dead -- the local narco who has the sheriff on his payroll; some ruthless Houston developers who want the rancher’s land; maybe his own daughter. Maybe the outlaw cousin who hired Burch.

Thrilled to be a manhunter again, Burch ignores these red flags, forgetting something he once knew by heart.

Be careful what you wish for. You just might get it. And it might just get you killed.

But it’s the best lousy choice Ed Earl Burch is ever going to get. 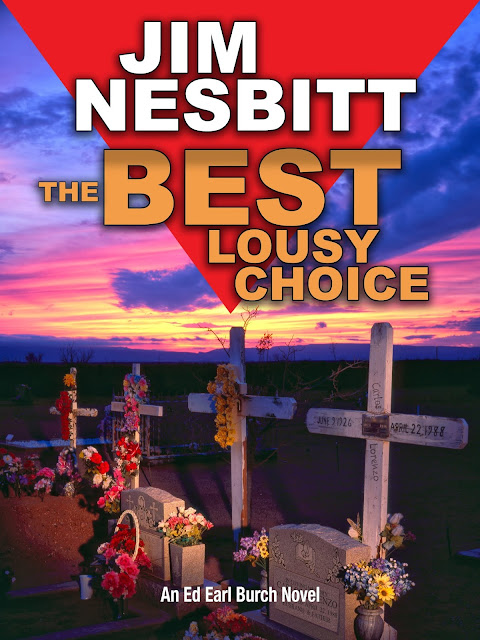 LOVE IT OR LEAVE IT WITH JIM NESBITT

Things you need in order to write: Like Faulkner said: “My own experience has been that the tools I need for my trade are paper, tobacco, food, and a little whiskey . . ..” I write on a laptop, but I edit from the printed page, so paper is a must. Bourbon or Tennessee whiskey, a good cigar and a ribeye are other must-haves. Make mine medium rare.
Things that hamper your writing: Milo, my 18-year-old cat. He likes to nap on my lap while I’m writing on my laptop. Nice work if you can get it. When he thinks I’ve ignored him for too long, he walks across the keyboard. Other entanglements: a demanding day job, advancing age that reduces my energy level, and a growing intolerance for music while I write. Lyrics get in the way of the words I’m trying to coax out of my head, but music is a fine thing while winding down from a long writing session or gearing up for one.

Things you love about writing: I have to disagree with Dorothy Parker’s line: “I hate writing; I love having written.” Writing is damn hard work and there’s no silver-bullet substitute for keeping your butt in the chair and pounding away for hours at a time — or staring at the screen or thin air when the words won’t come. But when the muse takes over and the words flow, when you’ve just etched a great scene or a stretch of snappy, killer dialogue — or, even better, when a character just elbows their way to the surface and takes over the book — it’s a sweet payoff for all those butt-numbing hours.
Things you hate about writing: When that fickle muse jilts you and it feels like you’re chipping away at a granite wall with a tiny rock hammer. When the demands of the day job or other duties keep you out of that chair when what you really need to be doing is writing — that creates a fierce guilt that tops anything the Baptists or Catholics can dish out.

Favorite beverage: George Dickel Tennessee whisky on the rocks. Close second: a well-made mojito.
Something that gives you a pickle face: anything with gin in it.

Things to say to an author: Your book was so addicting I stayed up until 2 a.m. to finish it — gave it a five-star review the next day.
Things to say to an author if you want to be fictionally killed off in their next book: Why do you give your characters such weird names — can’t you just call them Joe or Sheila? Or: Why do you spend so much time describing the scenery — I already know what the sky, the mountains or a couch look like.

Favorite books: The Time It Never Rained, by Elmer Kelton; Red Harvest, by Dashiell Hammett; The Long Goodbye, by Raymond Chandler; Bordersnakes and Dancing Bear, by James Crumley; American Tabloid, by James Ellroy; The Drowning Pool and The Chill, by Ross Macdonald; Devil In A Blue Dress, by Walter Mosley; A Walk Among The Tombstones, by Lawrence Block.
Books you would ban: I would never ban or burn a book, but I would remainder any and all self-help and diet books, with prejudice.

Favorite things to do: drive my 1972 Cutlass Supreme convertible with my wife; smoke a great cigar while sipping bourbon or Tennessee whiskey, pilot a vintage aircraft.
Things you’d run through a fire wearing gasoline pants to get out of doing: give a PowerPoint presentation, skydive, Christmas caroling, dancing, go to a soccer game, climb onto a roof, look down from a precipice, clean out the gutters or the garage.

Biggest lie you’ve ever told: told a drunk I was Jerry Garcia and signed an autograph as Jerry.
A lie you wish you’d told: that I’m a Texan instead of a Pennsylvanian.

Most daring thing you’ve ever done: dump a motorcycle to avoid colliding with a car.
Something you chickened out from doing: skydive.


EXCERPT FROM THE BEST LOUSY CHOICE 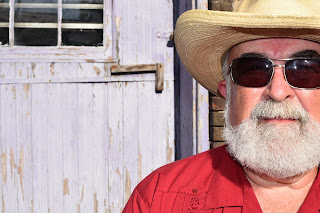 Jim Nesbitt is the author of three hard-boiled Texas crime thrillers that feature battered but dogged Dallas PI Ed Earl Burch — The Last Second Chance, a Silver Falchion finalist; The Right Wrong Number, an Underground Book Reviews “Top Pick”; and, his latest, The Best Lousy Choice. Nesbitt was a journalist for more than 30 years, serving as a reporter, editor and roving national correspondent for newspapers and wire services in Alabama, Florida, Texas, Georgia, North Carolina, South Carolina and Washington, D.C. He chased hurricanes, earthquakes, plane wrecks, presidential candidates, wildfires, rodeo cowboys, migrant field hands, neo-Nazis and nuns with an eye for the telling detail and an ear for the voice of the people who give life to a story. His stories have appeared in newspapers across the country and in magazines such as Cigar Aficionado and American Cowboy. He is a lapsed horseman, pilot, hunter and saloon sport with a keen appreciation for old guns, vintage cars and trucks, good cigars, aged whiskey and a well-told story. He lives in Athens, Alabama.