Book Review Living in the Middle by A Robert Allen. Based on true events. 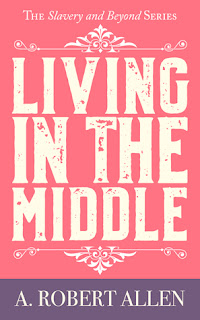 This is the fourth book in the series, The Slavery and Beyond Series.

Based on true events, the story swept me away into the lives of Jimmy Montgomery III and the choices he had to make as an eighteen-year-old.  On the brink of a new life, he faced a devastating truth about himself, a truth that was sending him on a different path from what he had planned.

During this turmoil, he faced life-threatening situations while figuring out who he truly was. He could no longer hide his race and took a bold step. That boldness, however, almost cost him more than his life.

Tulsa, Oklahoma was a boiling pot in 1921. Though Greenwood flourished financially they were always seen as Darkeys who were bad. There were quite a few incidents that let to hostility between whites and blacks and Jimmy's appearance was the final straw.

A tormenting story of cruelty, misunderstanding and greed on both sides of the tracks. Jimmy and his friends had to find the middle ground as well.

The book's honest narrative points out the suspenseful time in a very quick flow dialogue as you go deeper within the plot.

The author's account really emphasized the nature of every person involved.

Rejected by his race. Hunted by the Klan. Yet, standing up to hatred is still the only choice.

New York, Early 1900s: Jimmy Montgomery comes from old New York money and grows up among the Manhattan elite. At the age of eighteen, Jimmy discovers he’s been living a lie. He follows his roots back to Tulsa, Oklahoma to answer the burning questions in his life. Who is he? What is he? Where does he belong? He finds love and friendship along the way, but full acceptance from either the White or the Black world eludes him. When trouble pits the White population of Tulsa against the Black community of Greenwood, Jimmy must finally make a choice---he can no longer live in the middle. His decision will alter the course of his life and those he’d come to love. What will he decide? Pick up a copy to find out.
LIVING IN THE MIDDLE is a powerful African American historical novel based on the Tulsa Race Riot of 1921. If you like passionate heroes, no-holds-barred history, high-stakes emotional tension, then you’ll love A. Robert Allen’s eye-opening story.

LIVING IN THE MIDDLE is a stand-alone story connected by the theme to the other volumes in A. Robert Allen’s Slavery and Beyond series.