Historical
Diana Rubino
For Book Quote Wednesday, the word is LUCK. Authors, find LUCK in your book and Tweet using #BookQW.
A short snippet from my Depression/Prohibition novel BOOTLEG BROADWAY, Book Two of the New York Saga:
With a few hours till the joint opened, Billy went behind the bar, filled his flask, then went outside to lean against the brick wall and watch the world go by. This entire scene was foreign to him, this workforce who made their living by day and slept by night. A life he wasn’t cut out for. Bored with watching that after two minutes, he walked towards the Columbus Circle subway, passing all the briefcase-toting workaday stiffs in suits. He glanced at the tired and haggard faces. And these were the lucky ones-­they had jobs.
The subway reeked of stale urine, and for the first time in years, he had to stand and be a straphanger. The train swayed and jolted. The lights dimmed and blacked out, on and off. He lost his balance several times, bumping into bodies pressed up against him; he couldn’t have fallen if he’d tried. He mouthed silent thanks he’d been born with musical talent; he’d go off his nut if he had to live like this.
getBook.at/NewYorkSagaBookTwo 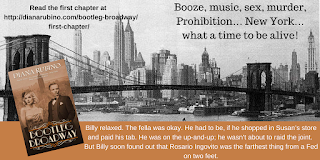