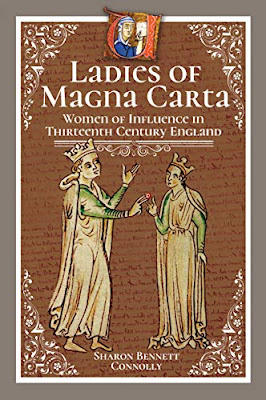 Available for Pre-Order from
Amazon UK and Amazon US
Ladies of Magna Carta focuses on the roles played by the women of the great families whose influences and experiences have reached far beyond the thirteenth century.
Matilda de Braose and Magna Carta
When reading about Magna Carta, the story that has always jumped out at me is that of Matilda (or Maud) de Braose. The only person to speak out against King John’s murder of his own nephew, Arthur, she suffered the ultimate punishment for her tenacity and went down in history as the inspiration behind clause 39 of Magna Carta itself:
“No man shall be taken, imprisoned, outlawed, banished or in any way destroyed, nor will we proceed against or prosecute him, except by the lawful judgement of his peers or by the law of the land.” Matilda de Braose was probably born in the early 1150s in Saint-Valery-en-Caux, France, to Bernard IV, Seigneur de Saint-Valery and his wife, Matilda. Contemporary records describe her as tall and beautiful, wise and vigorous. Sometime around 1166 she married William de Braose, 4th Lord of Bramber, a Norman lord with land on the Welsh Marches. William was highly favoured by both Richard I and, later, his brother King John.

Whilst William was away campaigning in Normandy, Matilda would be left to manage their estates in Wales. In 1198, Matilda defended Painscastle in Elfael against a massive Welsh attack by Gwenwynyn, Prince of Powys. She held out for 3 weeks until English reinforcements arrived, earning the castle its nickname of Matilda’s Castle. Also known as the Lady of Hay, Matilda has gone down as a bit of a legend in Welsh folklore, with one story relating how she built Hay Castle in one night, single-handed and carrying the stones in her skirts.

William and Matilda had around 16 children together, who married into some of the most powerful families of the time. Their eldest son, William, married Maud de Clare, daughter of the Earl of Hertford. Another son, Giles, became Bishop of Hereford. A third son, Reginald, married, as his second wife, Gwladus Ddu, daughter of Llewelyn the Great, Prince of Wales. Reginald’s son by his first wife, William, married Eva Marshal, daughter of the great knight and statesman, William Marshal, 1st earl of Pembroke.
It was this William de Braose who was ignominiously hanged by Llewelyn the Great, after being found in the bedchamber of Llewelyn’s wife Joan, the Lady of Wales and natural daughter of King John. William had been at the Welsh court to arrange the marriage of his daughter, Isabel, to Llewelyn and Joan’s son, Dafydd. Interestingly, the marriage still went ahead, although it was to be childless.

Of their daughters Loretta, married Robert de Breteuil, 4th Earl of Leicester. Loretta was to have her own influence on Magna Carta, when King John tried to deprive her of her dower estates following Robert’s death on crusade. Her experiences inspired clauses 7 and 8 of Magna Carta, which guaranteed that widows should have their marriage portions without hindrance and that they could remarry at their own pleasure, so long as it was with the king’s consent. Loretta and her sister, Annora, both became anchorites. Another sister, Margaret, married Walter de Lacy, Lord of Meath.

William de Braose was greatly favoured by King John in the early part of his reign. He was given Limerick in Ireland for 5,000 marks and also received the castle at Glamorgan and the lordship of Gower. William de Braose was the knight who captured the rival to John’s throne, Arthur of Brittany, at the Siege of Mirebeau in 1202 and possibly witnessed Arthur’s murder at Rouen in Easter 1203, he was certainly present at the castle, at the time, with King John.

It was following Arthur’s murder that things started to go wrong for the Lord and Lady of Bramber. John became increasingly suspicious of Braose’s loyalty and turned against him. This could have been for several reasons, not least being Braose’s knowledge of Arthur’s fate.

Elsewhere, Braose had fallen behind in his payments to the Exchequer for the honour of Limerick, but he had also sided with his friend William Marshal in his disagreements with the king. In addition, Braose’s son, Giles had been one of the bishops to approve an Interdict against John; as a result, Giles was exiled to France in 1208.

Whatever the reason, in 1207 King John moved to make a public example of one of his most powerful barons and sought to punish him for his debts to the Exchequer. John demanded William and Matilda give up their sons as hostages. Matilda refused and Roger of Wendover recorded her response to the soldiers sent to collect the boys, as; “I will not deliver my sons to your lord, King John, for he foully murdered his nephew Arthur, whom he should have cared for honourably.”
William is said to have admonished his wife for speaking so harshly of the king; but what mother wouldn’t react rashly when in fear for her children’s lives? William and Matilda realised she had gone too far and tried to placate John with gifts; Matilda sent a herd of cows to John’s queen, Isabelle d’Angoulême, with a fine white bull. But it was too late.

John took possession of Braose’s castles and moved to arrest William. Forewarned, the couple fled to Ireland with 2 of their sons, where they took refuge with Walter de Lucy, their son-in-law and Lord of Meath. John followed after them, bringing other recalcitrant barons to heal along the way. While William de Braose tried to come to terms with the king, Matilda their eldest son, William, and his family, escaped by taking ship for Scotland.

However, Matilda and her party were captured in Galloway by Duncan of Carrick, who sent them back to King John. Having been returned to England in chains, they were imprisoned in Bristol Castle. King John made an agreement with both William and Matilda; freedom for her and a pardon for William in return for 40,000 marks.
William was released to try to raise the huge ransom but fled to France, disguised as a beggar, when he was unable to do so. Informed of her husband’s escape Matilda remained defiant, refusing to pay the fine, saying she had only twenty-four marks of silver, twenty-four gold coins and fifteen ounces of gold left to her. Matilda and her son remained in prison – either at Windsor or Corfe Castle – and William was outlawed, he died in France in 1211.

Matilda’s fate was more gruesome; she and her eldest son were left to starve to death in John’s dungeons (though whether this was at Corfe or Windsor is unclear). Anonymous of Bethune described the macabre scene; ‘On the eleventh day the mother was found dead between her son’s legs, still upright but leaning back against her son’s chest as a dead woman.
The son, who was also dead, sat upright, leaning against the wall as a dead man. So desperate was the mother that she had eaten her son’s cheeks. When William de Braose, who was in Paris, heard this news, he died soon afterwards, many asserting that it was through grief.’

John’s treatment of the Braose family did not lead to the submission of his barons, as John had intended, and the remainder of his reign was marred by civil war. However, when Magna Carta was written in 1215, Clause 39 may well have been included with Matilda and her family in mind.
Sharon Bennett Connolly
# # #
About the Author 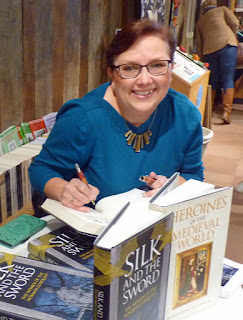 Sharon Bennett Connolly has been fascinated by history her whole life. She has studied history academically and just for fun – and even worked as a tour guide at historical sites. For Christmas 2014, her husband gave her a blog as a gift – www.historytheinterestingbits.com – and Sharon started researching and writing about the stories that have always fascinated, concentrating on medieval women. Her latest book, Ladies of Magna Carta: Women of Influence in Thirteenth Century England, is her third non-fiction book. She is also the author of Heroines of the Medieval World and Silk and the Sword: The Women of the Norman Conquest. Sharon regularly gives talks on women's history, she is a feature writer for All About History magazine and her TV work includes Australian Television's 'Who Do You Think You Are?' Find out more at Sharon's Blog historytheinterestingbits.com
and find her on Facebook and Twitter @Thehistorybits
Original link

More posts from author
Tuesday, 22 September 2020 Special Guest Interview with Juliette Lawson, Author of A Borrowed Past (Seaton Carew Sagas)
Monday, 21 September 2020 Guest Post: Writing a Novel, by Kate Ferguson ~ Part One: The Writing Process
Saturday, 19 September 2020 Thanks a Million For Your Support