Before Coronavirus: Katherine Willoughby and the dreaded sweating sickness 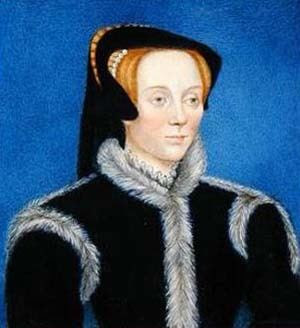 Soon after Henry Tudor claimed the throne as King of England, a virulent disease, known as English sweat, (in Latin sudor anglicus) broke out. No one knew of a cure. The number of cases rose each day and several thousand people died.
The sweating sickness seemed to go away until the 2ndApril, 1502, when the heir to the throne, Prince Arthur, died of an unexplained fever at Ludlow Castle. During the reign of Henry VIII, severe epidemics swept through London, killing hundreds, (including Thomas Cromwell’s wife), before spreading rapidly through the country.
The symptoms were a feeling of apprehension, cold shivers, headache, exhaustion and severe pains in the neck, shoulders and limbs. After as little as half an hour, profuse sweating broke out, followed by delirium, rapid pulse and intense thirst.
Katherine Willoughby was the daughter of Maria De Salinas, who’d arrived in England with Queen Katherine of Aragon as one of her ladies. She married Charles Brandon when she was fourteen, becoming Duchess of Suffolk, and they had two sons, Henry and Charles.
Five years after Charles Brandon’s death, Katherine’s sons, aged fourteen and sixteen, both found a place at university in Cambridge, and were doing exceptionally well, having been tutored by Prince Edward’s tutors. Then the sweating sickness came to Cambridge.
Katherine decided to ‘self-isolate’ them at the home of the Bishop of Lincoln in Buckden, Huntingdonshire, until the danger had passed. On the 14th July 1551, both of Katherine's sons showed symptoms of the fever. Katherine, who had been ill at her home in Kingston, arrived at Buckden just in time to see her youngest son, Charles, before he died within an hour of young Henry.
Read the full story in my new book Katherine - Tudor Duchess
Available from Amazon UK and Amazon US
Original link