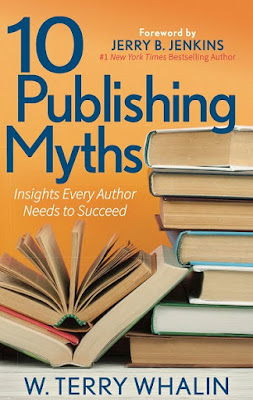 New on Amazon UK and Amazon US
10 Publishing Myths offers authors the chance to succeed in the publishing world by giving them practical tools they can use to succeed and dodge the myths of the industry.

The publishing world is filled with misconceptions and myths. Therefore, it is terrific for authors to have big ambitions as their book is being published, but, it is also important to be realistic and understand the world of publishing.
W. Terry Whalin has worked with hundreds of authors and published a number of bestsellers, and he knows that it is important to focus on creating a good book and not realistic about the business aspects.
Within 10 Publishing Myths, Terry focuses on giving authors a realistic picture of the book world then detailing practical steps they can take to succeed. Inside 10 Publishing Myths, authors learn the actions they can take to succeed, they get a step-by-step guide for practical results, and so much more!
“Terry Whalin’s new book, 10 Publishing Myths, Insights Every Author Needs to Succeed. gives authors solid action steps to take to be successful while increasing their understanding about the business of publishing. He breaks the myths that hinder authors in their journey.”  — Susan Reichert, Editor-in-Chief, Southern Writers Magazine.“10 Publishing Myths, Insights Every Author Needs to Succeed is not merely a collection of “tips and tricks” for writers. Based on years of inside experience, author Terry Whalin offers straight-talk advice to anyone willing to do the hard work necessary for publishing success.”  — David Horton, Vice President Editorial, Bethany House Publishers “For years, so-called truths have floated around in the publishing world, and naïve writers have believed them. In 10 Publishing Myths, Terry reveals the truth and shares important principles that affect a writer’s success. Using examples and stories, he shows what works and then provides plenty of help—including action steps—to encourage writers on the right path. Terry’s vast experience in the industry makes this an excellent resource.”  — Cecil Murphey, bestselling author of 140 books, including 90 Minutes in Heaven (with Don Piper) and Gifted Hands: The Ben Carson Story
# # #
About the Author

Terry Whalin has loved books since his mother read And to Think That I Saw It on Mulberry Street (the first Dr. Seuss book). He has worked both sides of the editorial desk—as an editor and a writer. He worked as a magazine editor and his magazine work has appeared in more than 50 publications. A former literary agent, Terry is an Acquisitions Editor at Morgan James Publishing. He has written more than 60 books through traditional publishers in a wide range of topics from children’s books to biographies to co-authored books. Several of Terry’s books have sold over 100,000 copies. Terry is a popular speaker and teacher at numerous writers’ conferences and an active member of the American Society of Journalists and Authors . He lives near Denver, Colorado. Finds out more at https://www.10publishingmyths.com/  and find Terry on Twitter @terrywhalin.
Original link